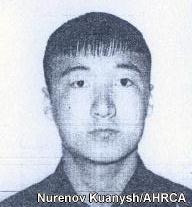 torture prevention
Convicted citizen of Kazakhstan Kuanysh Nurenov is serving his sentence in Uzbekistan. He was put in a punishment isolator and tortured. Intervention of the Kazakh diplomats did not help.
For the past several months Nurenov’s wife is being unable to obtain permission to seeing him. For several months his relatives do not know about his real location.
NURENOV Kuanysh Ordabaevich, DOB 25.10.1985, citizen of the Republic of Kazakhstan. In 2006 he was sentenced to 8 years of imprisonment under Articles 159 ("Encroachment on constitutional order of the Republic of Uzbekistan"), 244-1 ("Production or dissemination of materials containing threat to public security and public order") of the Criminal Code of Uzbekistan. We know from reliable sources that before September 2011 h served his sentence in colony 64/71 in the settlement Jaslyk (Republic of Karakalpakstan in Uzbekistan).
In August 2006 upon the invitation of his friend Kuanysh Nurenov was visiting Karakalpakstan and was arrested there. He was charged with heavy crimes. He was tortured during pre-trial detention. The participation of a lawyer as well the subsequent judicial proceedings were formality void of substance. To serve his sentence he was sent to Jaslyk where the inmates jailed under Article 159 are subjected to systematic torture. From the letter of his wife Lyazzat Salimova: “…He was beaten up time and again without reason till he would lose his consciousness; there is a deep scar on his head left from heavy beating. His camera mate could not stand such torture and committed a suicide. My husband has changed; he is very thin and is often sick”. 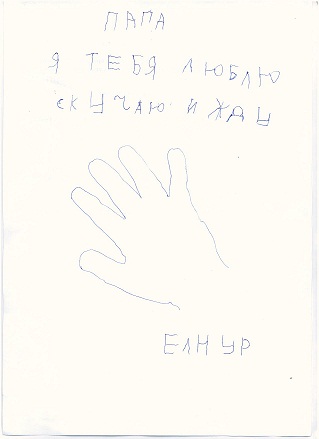 Complaints of inmates against torture in the colony “Jaslyk” often come from their relatives. In January 2011 the prosecutor’s office in Kungrad city conducted an inspection in that colony. The inmates were interviewed in the presence of the administration that impeded any critical communication. On 10 April 2011 there was a repeated inspection and that day Kuanysh Nurenov just like other inmates of the colony was forced to sign a statement prepared in advance: “I am fine, I am well fed, I am not beaten, I am in good health”. First he resisted signing the lie, but then they started beating him with a club on his soles and with barbed wire on his back.
“I fear for my husband’s life, the father of my son!” writes Lyazzat Salimova to the Association for Human Rights in Central Asia. She heard about Kuanysh’s suffering from his mother who is currently very ill and is unable to visit her son.
Kazakhstan and Uzbekistan does not have an agreement on the prisoner transfer. However, prisoner Nurenov’s wife keeps knocking on the doors of the embassies of Kazakhstan and Uzbekistan addressing the prosecutor’s office in Kazakhstan. Lyazzat speaks with much appreciation about the Kazakh diplomats. Consul went to Jaslyk with her several times. He saw how this fragile woman carries food to her husband and is trying to help him. Lyazzat believes in his innocence and hopes very much that Kazakhstan would not let down its citizen. “I bought food stuff for my husband for the last money I had. For several days I have been waiting for permission to see him, but the head of the colony does not recognize the marriage certificate issued by the Embassy of Kazakhstan in Uzbekistan. Everybody here is pushing me back and humiliating me. The food stuff that I brought for my husband is going off”, she said with tears on the phone on 11 November 2011.  This time she decided not to leave for Kazakhstan unless she sees her husband.
Kuanysh Nurenov and Lyazzat Salimova have a son, Elnur, who is almost five years old. He has not seen his father as his mother was pregnant with him when his father was jailed. The child has not gone to school yet, but he can write.   He sent a letter to our Organizations and asked us to give this letter to his father: “Daddy, I love you. I miss you. I am waiting for you. Elnur.” His mother   has not been able to see her husband for 5 years. She has been in common marriage before September 2011. However, after their marriage was registered, the head of the “Jaslyk” colony Berdyev ignored the marriage certificate against all logic. It looks like he has been impeding the meeting of spouses. But why has he? Was Kuanysh in such a deplorable condition that it would be better not to show him to the outer world or was it a way for the head of the colony to show his authority?
It is necessary to immediately ensure:
— humane treatment of the inmate Kuanysh Nurenov and stop mental and emotional abuse of his family;
— his right to see his close ones;
— the access to him for the representatives of the International Committee of the Red Cross.
Association for Human Rights in Central Asia - AHRCA calls on all the interested parties, organizations and mass media to turn their attention to the case of Kuanysh Nurenov and forward the relevant addresses to the leadership of the Republic of Uzbekistan on the following addresses:
torture Freedom to express Uzbekistan