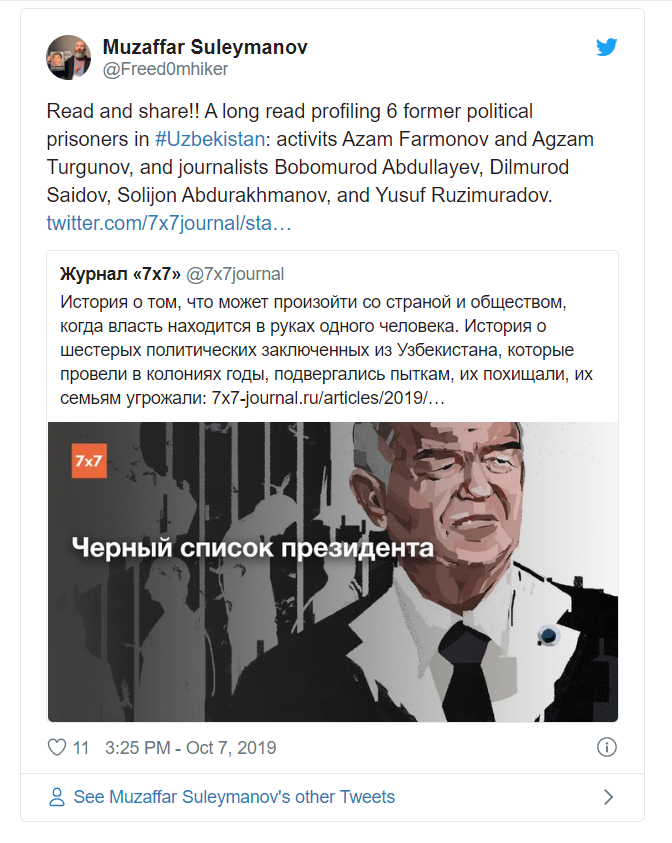 “I would like to reiterate to the state authorities that any blocking measures can only be justified in accordance with international standards, used only in exceptional cases, and be strictly proportionate to the legitimate aim pursued.”

In a positive development in May 2019, Komil Allamjonov, Director of the Agency for Information and Mass Communications under the Presidential Administration of Uzbekistan (AIMKA), publicly stated that he had looked into the issue of access to the websites of several news outlets and international human rights NGOs and restored full access to them, including: Voice of America, Amerika ovozi, the Uzbek BBC service, Deutsche Welle, Eurasianet, AsiaTerra, Fergana News, Uzmetronom, Amnesty International, Human Rights Watch, Reporters sans Frontieres, and others.
The stance taken by Komil Allamzhonov and the deputy director of AIMKA Sayra Mirziyoyev (eldest daughter of President Mirziyoyev) contrasts with the more passive position adopted by the national press centre and expressed at Presidential press conferences. AIMKA has created an effective mechanism for regulating information policy and, at the same time, media outlets and journalists can now access the official version of events and compare it with information from other sources.
News correspondents who received accreditation in 2019 included several foreign news correspondents from the British Broadcasting Company; BBC Monitoring (UK); Reuters (UK); The Economist (UK); Ferghana News agency, Voice of America; Eurasianet online (USA) and Agence France-Press (France).
Further, in recent years the internet has noticeably increased the ability to access information in Uzbekistan and promoted citizens’ interaction with independent sites, which provide a platform for civil society activists in the country and abroad, international partners and organisations. The internet has facilitated public discussion around pressing social issues including for example: demolitions of houses, extermination of stray animals, the situation for bloggers, the construction of a nuclear power plantas well as other more sensitive issues such as religion and protection of personal data.
Another interesting development was that statements made by international NGOs and Amnesty International’s Urgent Action of April 2019 regarding torture allegations against the former Prosecutor General Rashitjon Kadirov also led to a lively discussion on social media with an exchange of views on justice and international obligations. There is increased reporting in the media of pressing social problems and in February 2019 the General Prosecutor’s Office issued a press release on a suicide under investigation, reflecting a new level of transparency.
Trial of journalists Bobomurod Abdullayev, blogger Hayotkhon Nasreddinov and entrepreneurs Shavkat Olloyorov and Ravshan Salayev
From 7th March to 7th May 2018, an open trial was held in the Tashkent City Criminal Court of independent journalist Bobomurod Abdullayev, blogger and teacher Hayotkhon Nasreddinov, as well as entrepreneurs Ravshan Salayev and Shavkat Olloyorov, all accused of anti-constitutional crimes (under Article 159 Criminal Code), which are punishable by 20 years in prison. The charges were politically motivated and the trial attracted unprecedented attention from international media.
Bobomurod Abdullayev told the court that for many years he had written under the pseudonym “Usman Khaknazarov” about state corruption. He also described how he had been tortured during interrogation and investigation by senior National Security Service officials to get him to testify against incumbent President Mirziyoyevand political opponents such as the leader of the opposition party Erk, Muhammad Salih,and other critics abroad.
Judge Zafar Nurmatov ruledthat Ravshan Salayev, Shavkat Olloyorov and Hayotkhon Nasreddinov be acquitted and released from custody immediately. In relation to Bobomurod Abdullaev, the judge ordered that the charge be reclassified from Article 159.4 (conspiracy to seize power or overthrow the constitutional order of Uzbekistan) to Article 159.3b (public calls to overthrow the constitutional order, ... committed by an organised group or in its interests), and sentenced him to three years of correctional labour. The judge then announced that Abdullayev would also be released as he had already served 221 days in pre-trial detention and that one day in pre-trial detention counts for three days in prison. The verdict was met with cheers and applause from spectators in the courtroom, including international observers and press representatives.
In 2018 Bobomurod Abdullayev and Hayotkhon Nasreddinov were awarded the Sakharov Order for Courage.
Defence lawyer Sergey Mayorov said that he was unhappy with the verdict: “I believe that Abdullayev did not commit a crime, and he should be compensated.” But, according to him, it is dangerous to appeal the sentence as he does not believe his client would get a fair appeal trial and this could result in a more severe sentence.
This is the first trial in 25 years where the judge acquitted and ordered the release of the defendants and repeatedly reminded the parties of the presumption of innocence.
However, since Bobomurod Abdullayev was released from detention he has been subjected to surveillance and harassment by Uzbekistani security services. He wishes to travel abroad for medical treatment and has submitted a request for a passport but the SNB have not yet given him an answer.
Continuing concerns about activists (formerly) imprisoned on politically-motivated charges
Since September 2016, 30 civil society representatives imprisoned on politically motivated grounds have been released from prison. The following civil society activists and journalists were released in the period under review: journalists Aziz Yusufov and Bobomurod Abdullaev,blogger Hayatkhon Nasreddinov, members of the Human Rights Society of Uzbekistan (HRSU) Mehriniso and Zulkhumor Khamdamov,witness of the Andijan tragedy Dilorom Abdukodirova and member of the Human Rights Centre Mazdil Mazdum Fakhriddin Tillayev.
Although all those released were targeted for political reasons and convicted on fabricated charges, Andrey Kubatin (see below) is the only one to date who was acquitted on appeal. Many are in need of rehabilitation and medical and psychological treatment after surviving torture, ill-treatment, prolonged moral and psychological pressure and separation from their loved ones. Many are still under state surveillance.
After his release in 2018 Tillayev wrote:

"I was beaten repeatedly and put in a punishment cell [solitary confinement]. I was not only humiliated, but forced to do hard physical labour, which destroyed my health: a hernia, gastrointestinal illnesses, ear infection and my nerves suffered… injustice will deplete any person.”