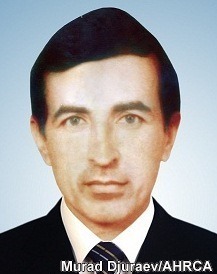 On 10 October 2012 political prisoner Murat Juraev was placed in a punishment cell for further eleven days. On  13 November fifth term of his punishment will expire, however, this might not be the last one.
Djurayev hs difficulty walking and barely is audible when he speaks. He lost all hope of being released. The urgent intervention of the international community is needed.
On 5 September 2012 Murad Djurayev turned 60. A former member of the Supreme Parliament of Uzbekistan, for over 18 years, Murad Djurayev has been in prison. Eyewitnesses reported that his health is in a critical state. Over the years of his imprisonment, Murad Djurayev has lost his teeth, he has a constantly inflamed pharynx, and he has chronic headaches. For all the years of imprisonment, the International Committee of the Red Cross has never visited him.
Since 18 September 1994 he has been in prison. At present he is held at Prison Facility N°64/45 near the town of Almalik in Tashkent region.
On 31 March 1995 Murad Djurayev was sentenced to 12 years imprisonment to be served in a strict regime penal colony. On the basis of an amnesty, the sentence was reduced by three years.
Murad Djurayev was accused of conspiring with the leader of the “Erk” opposition political party, Mukhammad Solih, who according to the authorities, tried to organize a violent coup.
Shortly before the end of his sentence term in 2003, Djuaryev was convicted on trumped-up charges under Article 221 of the Criminal Code of Uzbekistan «Disobedience to the legal demands of the administration of the administration of the penal institution» for yet another three years of imprisonment. The same happened in 2006 when coming to the end of his last sentence term, the prisoner was given an additional three years of imprisonment under Article 221 of the Criminal code of Uzbekistan. In March 2009, using the same Article, his prison term was again extended by three years and four months. Among other reasons given – the punishment was given because he “improperly cleaned carrots,” when working in the kitchen. In November 2012, he will complete his fifth sentence. Will it be his last?
In May 2011, the leader of the opposition party “Erk” and political refugee, Mukhammad Solih lead the the People’s Movement of Uzbekistan. This seriously alarmed Uzbekistan’s President Islam Karimov. Many political prisoners, even those with no connection to Mukhammad Solih, found their sentences extended, civil society activists once again were not given permission to leave the country, and many sites on internet are blocked in the Country.
The Association for Human Rights in Central Asia - AHRCA believes that Murad Djurayev has been groundlessly imprisoned and calls for intervention on his behalf to:
- UN High Commissioner on Human Rights;
- UN Special Rapporteur on Torture;
- International Committee of the Red Cross;
- European Union;
- United States Department of State;
- and other international organizations.
torture Political prisoners