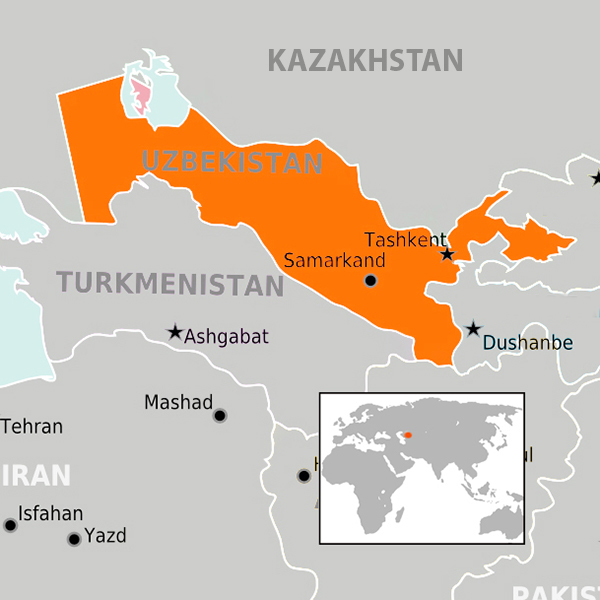 Specifics of the practice of Uzbek Courts. It is not the first time that a sentence read out in the Court room is different from the one that was handed down. On 6 March 2014 the Judge Sanjar Makhmudov announced that both human rights activists received identical terms i.e. 8 years and 3 months. It later emerged that Tillaev’s term was 8 years and 9 months and Djumaniyazov’s term was 6 years. The Judgement does not explain why Tillaev received a more severe punishment than Djumaniyazov.
A summery of the Appeal Application. The Application states that according to the Judgement Fakhriddin Tillaev is found guilty of being a member of an organised group which included Nuraddin Djumaniyazov and Khurram Berdiev, who lives in Kazakhstan; in September 2013 they sent the citizens of Uzbekistan Farkhad Pardaev and Erkin Erdanov to city of Shimkent of Kazakhstan with promises of salary of 600-1,000 USD.
According to the narrative of the Judgement, Tillaev did not travel with the “victims” to Kazakhstan and is only indirectly linked to this story. According to the “victims”, he met with them at a market place, when he approached them asking to sign up to the Trade Union of Freelance Labourers. He did not see them after that.
Fakhriddin Tillaev stated that he has nothing to do with Fakhriddin Pardaev and Erin Erdavon getting into to Kazakhstan. This was confirmed by the victims themselves, who passed the border crossing legally, without assistance of Tillaev and obtained a registration once there. When they arrived at the place of work, it turned out that they know nothing about construction works. Pardaev and Erdanov were offered to return to Uzbekistan. However, they asked very insistently to be given any work. They did not do a good job of even not complex tasks. Pardaev and Erdanov partially confirmed this; a citizen of Kazakhstan Zhanar Demeuova gave a witness account to this effect. According to her, they lacked any desire to learn anything or do any work. She added that no one abused or mistreated them.
Pardaev and Erdanov always had mobile phone is their possession. They could have contacted the police in Shimkent at any time or report to their family if they were subjected to beating, or abuse. Somehow, they never took this option.
It is absolutely unclear, why the victims who have skills as an electric, plumber, driver and plasterer did not want to work locally where they lived. These skills are very much sought after and well paid in Uzbekistan.
When they returned to Uzbekistan, neither Pardaev nor Erdanov sought medical care for alleged bodily harm caused. But, thanks to timely help from Abdulla Tojiboy Ogli and under his dictation they put down a complaint to the Tashkent city Department of the Ministry of Internal Affairs in which they wilfully distorted the facts in relation to their time in Kazakhstan.
During the investigation stage, a statement provided by Zhanar Demeuova was included in the case materials. She asserted that Pardaev and Erdanov did not work, were not skilled and only caused expenses.
The Court received an application to call Ms Demeuva as a witness, she agreed to give evidence, but the Court rejected the application.
The investigation was expedited and it took only 1 hour 50 minutes to charge Tillaev, question him as accused and to allow time for him to read the case materials against him. The case was referred to the Prosecutor’s Office on the same day.
It took 2 hours to question Tillaev, Djumaniyazov, Pardaev, Erdanov and Abdulla Todjiboy Ogli. After this, the Court left the room to elaborate on the Judgement and rejected an application by Fakhriddin Tillaev requesting a medical examination.
The application by Tillaev requesting a medical examination was filed on 23 January 2014. The investigating officer K. Abduzhalolov accepted it. But, up to this day, neither Tillaev nor his lawyer received the results of the medical examination.
On 5 March 2014, one day before the hearing, the investigating officer reported in writing that the application was sent to the Warden of the Tashkent Prison. It is not clear what provision of which law was the investigating officer guided by when deciding that the Warden of the Tashkent Prison was an appropriate official to consider this application as opposed to a forensic specialist.
The defence is of an opinion that the case lacks evidence of Fakhriddin Tillaev’s guilt. The lawyer applied to repeal the Judgement of the first instance on the basis of the following provisions of the Criminal Procedure Code of the Republic of Uzbekistan:
- Article 497-1 (Decisions Subject to Bringing Complaint and Protest against by Way of Appellate Procedure);
- Article 497-2 (Persons Who Have Right to Bring Complaint and Protest against Sentence by Way of Appellate Procedure);
- Article 497-3 (Procedure for Bringing Appellate Complaint and Protest against Sentence);
- Article 497-4 (Procedure for Extending Time Limit for Bringing an Appellate Complaint or Protest).
The Association for Human Rights in Central Asia is of an opinion that the hearing by the Appeal Panel was not objective: it relies on the evidence given by persons who could not prove that they were subjected to exploitation in Kazakhstan; even if the exploitation took place connection of Tillaev and Djumaniyazov to this is not proven.
We previously reported on this case in the following press releases:
- " Uzbekistan: a human rights activist Nuraddin Djumaniyazov disappeared " dated 12 May 2015;
- «Uzbekistan: a human rights activist Nuraddin Djumaniyazov is admitted to a hospital» dated 14 October 2014;
- «Uzbekistan: the Supreme Court upheld the Sentence against human rights activists Tillaev and Djumaniyazov» dated 14 October 2014;
- «Uzbekistan: Two Human Rights Defenders Imprisoned for 8 Years, 3 Months» dated 8 March 2014;
- «Uzbekistan: Fakhriddin Tillaev, a human rights activist is under threat of long term imprisonment» dated 18 February 2014.
torture defenders Uzbekistan