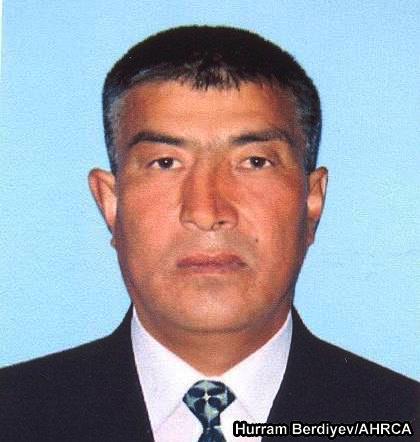 defenders
Human rights defender Hurram Berdiyev, who heads the Mazlum Human Rights Center chapter in Surhandarya Region, has lived abroad for several years.
Uzbekistan has declared him wanted on suspicion of “complicity in trafficking of persons.”
On 6 March 2014, during a trial of two members of the Mazlum Human Rights Center – Fahriddin Tillayev (born 15.08.1971),) and Nuraddin Jumanniyazov (born 18.10.1948), charged under Art. 135 of the Uzbekistan Criminal Code (trafficking in persons) – the name of Hurram Berdiyev was mentioned. The victim – Farhad Pardayev (born 27.02.1969) and Erkin Erdanov (born 5.07.1959) gave testimony both during the investigation and in court that they had allegedly had their rights completely restricted while performing a job, including by harsh treatment and non-payment for work. According to their testimony, Hurram Berdiyev, with whom they lived for several days in Chimkent at the recommendation of Nuraddin Jumaniyazov, has some relationship to these unlawful actions. In fact, it was at the request of Hurram Berdiyev that Janar Demeuova, a citizen of Kazakhstan, looked for work for them. Demeuova’s testimony is attached to the criminal file, and she refutes these charges. The court pronounced the testimonies of Pardayev and Erdanov reliable. Soon afterward, Hurram Berdiyev was declared wanted.
The Association for Human Rights in Central Asia has established:
Hurram BERDIYEV was born on 13 April 1961. A native of Kumkurgan District of the Surhandarya Region. He has a college education, and worked for many years as a middle school teacher in his district. Berdiyev was present at the creation of the Maslum Human Rights Center and coordinated the activity of the Surhandarya regional chapter. Since February 1991, he has been a member of the Erk Democratic Party. He has four sons.
The persecution of Hurram Berdiyev began when the authorities learned that he supported the demands of the European Union regarding the necessity for an international investigation of the Andijan events of 13 May 2005.
On 15 August 2007, Berdiyev went to pick up his passport at the passport and visa department (OVIR) for his place of residence, which is located at the Jarkurgan District Department of Internal Affairs of the Surhandarya Region of Uzbekistan, but then did not return home. For nearly two months, his family did not know his whereabouts. The disappearance of Berdiyev was preceded by intensified pressure from the Uzbek authorities. He became an object of public investigation involving the members of the mahala, his relatives and colleagues. Berdiyev was denounced for his civic position. Law-enforcement agents also took part in such meetings, who set the community against Berdiyev.
On 10 October 2007, the Association for Human Rights in Central Asia announced the disappearance of Hurram Berdiyev and appealed to the special rapporteurs of the UN and the European Union. And Berdiyev was found in the Jarkurgan District Department of Internal Affairs of Surhandarya Region.
Soon afterward, Hurram Berdiyev was threatened with arrest. He left Uzbekistan and has been an émigré ever since. For some time, Berdiyev lived in Russia, and then traveled to Kazakhstan. In September 2013, his colleague Nuraddin Jumaniyazov appealed to him. He asked him to take in two men from Uzbekistan who were looking for work.
The Association for Human Rights in Central Asia is concerned about the fate of the Surhandarya human rights defender Hurram Berdiyev in connection with the declaration of him as wanted by police.  We consider the charges against him of “complicity in trafficking of persons” to be the latest attempt by the authorities to persecute a human rights advocate.
See also the press release “Uzbek Human Rights Defender Hurram Berdiyev Missing” of 10 October 2007.
Freedom to express Refugees