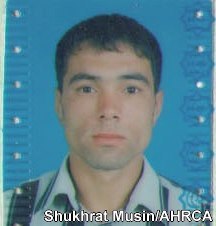 On 8 October 2013 it became known that an Uzbek citizen, Shukhrat Musin, who went missing from Bishkek is alive and is held in the Andijan prison for about 8 months.

Shukhrat Musin’s family learned his whereabouts from Gafurjon Tashkhodjaev. He introduce himself as a stated appointed lawyer to Sh. Musin, a member of the Andijan Bar Association. He said that Musin urgently needs warm clothes and that his family can meet with him.
On 18 February 2013, someone called on Shukhrat Musin’s mobile and he went out, saying that he will be back soon. His two underage children and his colleague were in the house he rented in the Alamedin residential area of the Sverdlovsk district of Bishkek. His wife, at this time, was on her way from Jalal-Abad to Bishkek. He did not return. His disappearance was preceded by numerous threats, a detention and arrest for several months. Articles, signed by not real names, containing allegations against him appeared on the Internet. A certificate of the High Commissioner for Refugees, issued to him in January 2010, was made public, without Musin’s consent. In 2009 Shukhrat Musin was recognized as a refugee under the UN mandate. He was living in Kyrgyzstan while awaiting resettlement in a third country. By that time, Uzbekistan declared him wanted . Shukhrat Mussin’s parents were relocated to the United States by the UNHCR.
Shukhrat Sharipovich Musin was born on 30 September 1984 in the town of Jalal-Abad in Southern Kyrgyzstan. He grew up in the town of Khanabad of the Andijan region of Uzbekistan.
In 2007, after he and his friends watched the video of the events in Andijan in May 2005, he attracted the attention of the Uzbek National Security Service (SNB). In April 2008, several of them were arrested, accused of involvement in the so-called Wahhabism and sentenced to imprisonment. The house where the Musins lived was searched several times, during which religious literature was planted. Later, it turned out that the planted literature was banned, under the law of censorship, by the State Committee for Communication, Informatisation and Telecommunication Technologies of the Republic of Uzbekistan.
The UNHCR office learned of Shukhrat Musin’s disappearance by noon of 19 February 2013.  On the same day, his wife applied for legal aid in the Public Foundation “Adilet Legal Clinic”, and since then Musin has a lawyer in Kyrgyzstan. However, he was unable to find out Musin’s whereabouts.
Under a Power of Attorney given by his father, Sharip Musin, who lives in the US, his friends retained a lawyer in Uzbekistan since 4 March 2013.
The Association "Human Rights in Central Asia" is in possession of the replies of Uzbek government departments, including the Andijan City Prosecutor’s Office, the city of Andijan Division of the Ministry of Internal Affairs and Andijan Region Department of Entry-Exit and Registration of Citizenship. They all said that according to the information they have, Shukhrat Musin was not in Uzbekistan.
It is clear that the law enforcement agencies of Uzbekistan deliberately concealed information about the whereabouts of Shukhrat Musin and Uzbek National Security Service did not respond to two requests for information by his lawyer.
We shall find out soon if Shukhrat Musin’s lawyer, hired on request of his father, will have access to his client.
You can read our previous publication about Shukhrat Musin’s disappearance here:

— press release «Kyrgyzstan: Shukhrat Musin a refugee from Uzbekistan is missing. Are the Kyrgyz and Uzbek secret services involved in his disappearance?» of 27 February 2013.