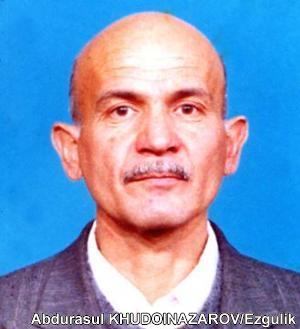 obituaries
Members of the Association for Human Rights in Central Asia express their condolences to the relatives of human rights activist Abdurasul Khudoynazarov.
On 26 June 2014, at about 8 am, 58 years old activist Abdurasul KHUDOINAZAROV died. He was a chairman of the Angren city department of Human Rights Society of Uzbekistan "Ezgulik". The main focus of his work was to protect people from torture and the fight against corruption in law enforcement agencies.
On 30 May 2014 Abdurasul Khudoinazarov was released from prison. In 2005, charges were fabricated against him under the Criminal Code of Uzbekistan, Articles 165 (extortion) and 209 (forgery).
Khudoynazarov was sentenced to 10 years of imprisonment. It was the authorities' response to his principles.
Abdurasul Khudoinazarov was one of the first to support the sanctions imposed by the European Union against Uzbek government's refusal to allow an independent international investigation into the Andijan events (2005), when government forces used firearms against civilians.
After his release from prison Abdurasul Khudoinazarov lived with his family only for 25 days. While in custody, he was tortured, he repeatedly inflicted injuries, including being struck in the region of his liver; he was starved and had limited access to health care.
As an outspoken advocate against torture, Khudoinazarov had had a first-hand experience of the horror of the punitive system of Uzbekistan.
One of his inmates wrote to us: "Rasul was gentle, kind, responsive and a quiet man. The prison administration devised frequent provocations against him. As soon as the representatives of the International Red Cross expressed a desire to meet with him, he was taken away to the Khavast prison. I will tell you the story.
It was a Saturday, we were being transported from the Prison UYA64/21 of Bekabad; no explanation provided as to why. We were put into small vehicle; there were three foreigners, Rasul Khudoinazarov, I and other two prisoners. All of us were traveling in the same small cabin, under a lock, the windows were closed, and the heat of 50 degrees. It was summer. We were all sweating, struggling for air, ahead of us just the door with iron bars. The car in which we traveling was from the Soviet era, it did not have a shock absorber and every time it drove through a pot-whole we were thrown to the ceiling and dropped down dramatically, on top of it, we could not breathe properly. All this time, we were watched intently by two armed soldiers with dogs. This is how we travelled from Bekabad to Havast, some 40 kilometres away.
We were met by the prison chief (Major) Otabek  Sadyrov. It had just been 18 days since he took his new post of Chief of the Prison UYA64/SIZ-13 in Khavast. We were then registered as in transit so that the Red Cross would not be able to determine our location.
Rasul and I then spent in Khavast from 22 September until 16 November 2012. And then he was issued two disciplinary violations and sent to a prison colony.
We were kept in the toughest conditions. We had to endure not only unsanitary conditions, at times, we were not given food for two days and then they would give us food with rotten smell ... We were not allowed to sleep. We were not taken out for a walk. We were constantly under stress and waiting to die, because we felt completely unprotected, and the attitude towards us was as to enemies.
Rasul loved his wife and children. He always thought of them and dreamed that they live in a country where justice is restored and the children will be happy. He loved life and fought for his life. "
To the cherished memory of Abdurasulov Khudoynazarov!
torture defenders