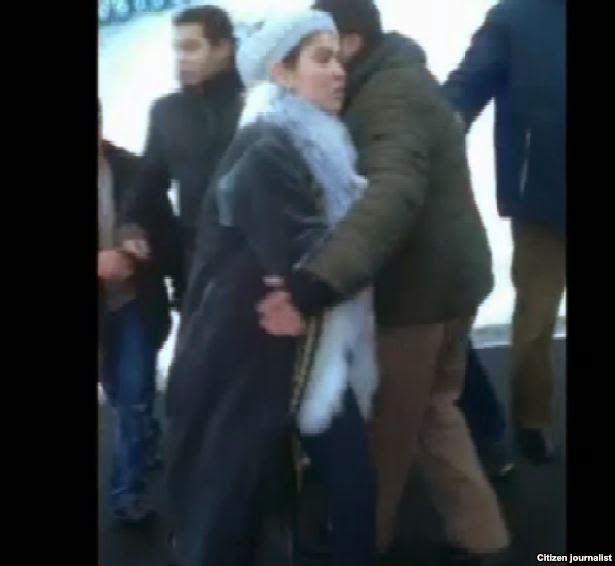 commentary
Initially, this video causes an emotional response to the position of Gulnara Karimova. After all, it is a tragedy when a daughter can not talk to her father. He fenced himself from her by numerous security guards. The way guards of the head of state look like on this video is a separate conversation.
Islam Karimov rules the country for a quarter of a century and it is his duty to ensure compliance with human rights and freedoms. But he did not realise that tyranny does not ensure the stability of government, it only kills the confidence of the people. Even the children of a modern dictator Islam Karimov were helpless when they were deprived of the golden cage.
When I see these frames of disheveled, unhappy Gulnara with skewed cap with bells on her head, involuntarily, I recall a video where she is surrounded by Gayane and other accomplices of her crimes. Not so long ago, she was wearing a gleaming crown of jewels instead of this sorry hat (!) Probably of the «Guli» brand name... Gulnara is suffering, but will she come to the right conclusions? It is unlikely, because she is driven by resentment, and seeks to restore the status quo in the ruling group.
Islam Karimov treats his daughter Gulnara cruelly now. But, does he not really love her? Perhaps, it is all more tricky than this. Yes, Karimov is guarding against his daughter, but, in practice, he continues patronizing her. How else can one explain the fact that she has not yet been held accountable for the crimes of which her accomplices Gayane Avakian, Rustam Madumarov and others, whose names are kept secret are accused. The authorities destroy evidence of her guilt and shift responsibility for the crimes to the executors of her whims. Gulnara is not even under a house arrest. She was sighted in the city. She travels by car, although it is not as pompous as before. The main thing is that she is free and not behind the bars. She is no longer allowed to squander the country's budget. She is not given a permission to travel abroad. But this is done in order to avoid her arrest: in several countries, there are criminal cases involving offenses for which Gulnara has a direct responsibility.
I have no doubt that all the crimes by Gulnara Karimova were committed with the full consent of dictator Islam Karimov. And now his goal is to return the funds stolen by his daughter back to Uzbekistan. The family of the First person is accustomed to impunity. Corruption in Uzbekistan has reached such proportions that it threatens the security of the country.
This is how the political system which Karimov created operates. But no matter how he fought against the public, the citizens of Uzbekistan still will not be silent. Especially now, when Karimov came to the unprecedented shame. Never in its history did Uzbekistan have as many political prisoners and political refugees, such low economic performance and a low reputation in the international arena.
Even the most brutal dictatorship is powerless before publicity and the influence of democratic states. Therefore, the discussion of each crime of the Karimov regime gives us a hope for deliverance from despotism and makes us freer.
Radio Liberty
http://www.ozodlik.org/content/transcript/26545228.html
corruption