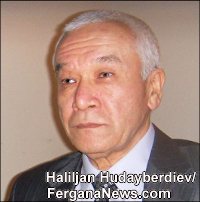 ethnic strife
Here are the facts:
Rosa Otunbaeva recently declared that not a single representative of the media had left Kyrgyzstan in 2010. We know that during that year, in order to avoid extrajudicial reprisals, illegal arrests, abductions, forged up criminal cases, and persistent persecution, the following journalists were forced to abandon Kyrgyzstan:
- Haliljan Hudaiberdiev - director of OshTV;
- Javlon Mirzahodjaev - director of MezonTV;
- Makhamadjan Abdullaev - director of DastanTV;
- Odina Saipova - editor-in-chief of the Oidin magazine;
— Barno Isakova – editor-in-chief of the newspaper Akhborot;
- Hosiyat Bekmirzaeva - deputy editor of the newspaper Akhborot.
According to our sources, this is just a small part of the journalists who have left the country.
Under the pressure of the authorities, the staff at practically all of the Uzbek-language mass media in Kyrgyzstan was almostentirely replaced. Ex-editors and correspondents are being sought on fabricated charges.
On the 11th of May 2011, Dzhalal-Abadsky Municipal Court started consideration of a criminal case against journalists Haliljan Hudaiberdiev and Javlon Mirzahodjaev. They are being charged with particularly grave crimes, which carry long prison sentences. The trial will be carried out without the participation of the accused or their lawyers. The objectivity of this trial is therefore clearly compromised. And President Rosa Otunbaeva is not showing any interest in the fate of journalists who used to work for Uzbek-language audiences in the country she leads.

We are attaching the appeal of the director of OshTV, Haliljan Hudaiberdiev to the President of Kyrgyz Republic Rosa Otunbaeva hoping that she will pay attention to the persecuted journalists.
* * *
Attachment N°1
To the President of the Kyrgyz Republic
Ms Otunbaeva R.I.
From the citizen of the Kyrgyz Republic
Director of the OshTV Company
Hudaiberdiev H.T.
10 May 2011
Re: On the fabrication of charges and grounds for absence from the trial
Dear Rosa Isakovna,
I am turning to you on the eve of the trial in which a criminal case against me and five other public figures and artists, representatives of the ethnic Uzbek community in the South of Kyrgyzstan, will be examined. I learned from the online editions of some publications that I was being charged under the following articles of the Criminal Code: art. 233 parts 1, 2, 3 «Organization and participation in mass disorders», art.295-1 «Separatist activity», art. 299 part 2 points 1, 3 «Incitement of national, racial, religious or interregional hostility», art. 221 part 2 «Abuse by commercial or other organisations’ employees of their authority against the interests of their employer in order to extract a profit for themselves» and art. 229 parts 1 and 2 «Illegal creation of an armed formation». Unfortunately, I still do not have access to the bill of indictment, and therefore I cannot comment on the evidence used in support of the charge brought against me.
In July 2010 I had to leave Kyrgyzstan to escape reprisals against me and my relatives. The threats came from the mayor of the city of Osh, Melisbek Myrzakmatov. I informed public and international observers about these threats shortly after receiving them. I was undoubtedly facing danger. The threats were preceded by my meeting with M. Myrzakmatov on the 1st of July, at his home near the Frynzensky market. He invited me to his home and laid out his conditions: he wanted me to give away 51 percent stake in the ownership of “OshTV” to Koshbaev K. During our meeting at his home I was surrounded by young men of athletic build, constantly showcasing their readiness to carry out any of Myrzakmatov’s wishes. Feeling threatened, I agreed to transfer the shares.  At that moment I was hoping that this decision would allow us to continue broadcasting our programs and ensure my own safety and that of my colleagues. But shortly after, the situation escalated, and emigration became my only option.
I am asking you, as a guarantor of human rights and freedoms in Kyrgyzstan, to pay attention to the fact that this investigation has been mandated from the very beginning. I think that my persecution and discrimination on ethnic grounds is a result of the abuse by Myrzakmatov of his official position as the mayor of the city of Osh.
The report of the International Independent Commission on the investigation of the events in the south of Kyrgyzstan in June 2010 stresses that Kadyrjan Batyrov, a former Member of Parliament, did not issue illegal appeals. Therefore, granting him some airtime does not contradict the law. Nevertheless, the persecution of Batyrov and the TV companies that gave him airtime is persisting.
At the earliest opportunity, I have divulged the reasons for leaving the country on the on-line news site, “Fergana.Ru”.
I completely realize the complicated nature of the present situation caused by the interethnic conflict. I am grateful that you allowed for the investigation by the International Independent Commission of the events of June 2010 in Southern Kyrgyzstan. It gives hope to victims that justice will be served and that they may return to their native land.
I am pleading with you to pay attention to my appeal, and not to allow for an unfair trial to take place in my absence. I hope that the Constitution of Kyrgyzstan will be observed!
Sincerely yours,
Haliljan Hudaiberdiev
Freedom to express