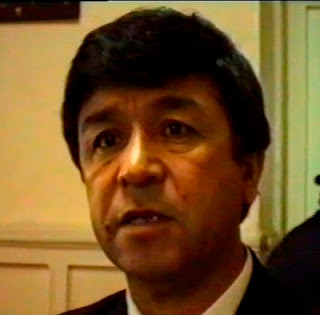 political prisoners
72-year old Uzbek writer Mamadali Makhmudov has been imprisoned for the past 14 years. A few days ago he was transferred from colony to the Tashkent prison.
16 February 2013 the imprisonment term issued in 1999 is ending. In October 2012 authorities made it clear that new charges are being produced against him. 12 of February 2013 this has been confirmed.
Writer Mamadali MAKHMUDOV (pen name Evril Turon) was born in 1940, citizen of Uzbekistan, former chairman of the Culture Foundation of Uzbekistan, leader of the movement “Turkestan” founded by the initiative of the Uzbek intellectuals, which existed from 1989 to 1993. Laureate of the Hellman – Hammett award given to writers, victims of political persecution and “Cholpan” award instituted in memory of the victims of Stalin’s repressions, which he received for the historical novel “Immortal Rocks”. In 2008 French Publisher "L’AUBE" published this novel in the French translation by Philippe Frizon.
For three months relatives of Mamadali Makhmudov have not been able to see him. 14 November 2012 Mamadali Makhmudov had a meeting with his daughter in “sangorod” – a hospital colony UYa 64/18 of the Tashkent city. The writer was accompanied by guards to the meeting and stayed in the room during the meeting. His daughter saw a deep wound on Mamadali Makhmudov’s head, but he did not say anything about the cause of the wound. He only mentioned that he was suffering from high blood pressure 200/150 and general weakness. A few years ago doctors diagnosed the writer with tuberculosis.
Relatives do not know what happened to him and why there was a wound on his head. Recently the jailed writer sent a letter home asking for medicines to treat inflammation of nasopharynx. Since a few years ago he cannot do without nasal drops as he cannot breathe without them. Makhmudov looks weakened and emaciated.
11 February 2013 Mamadali Makhmudov’s son went to a meeting with his father to Chirchik to the colony 64/6, stood in a long queue in order to give his father food and medicines, but his parcel was rejected and he could not see his father. It turned out that Makhmudov was transferred to the Tashkent prison where persons under investigation and those awaiting transportation under guard.
12 February 2013 the daughter of the writer came to a meeting with her father to the Tashkent prison, but the meeting did not take place. They only took the medicines and told her that a criminal case was opened against Makhmudov.

26 February 1999 the writer was detained. 18 August 1999 the Tashkent province court sentenced his to 14 years of imprisonment under Article 25-159, Part 4 Criminal Code of Uzbekistan (encroachment on constitutional order); Article 216 (organisation of prohibited public associations and religious organisations); Article 242 Part 1 (organisation of criminal associations). Before his transfer to the Tashkent prison he was serving his sentence in the strict regime colony UYa 64/6, Chirchik town, Tashkent Province. This is not the first conviction of the writer upon fabricated charges.

In 1994 Mamadali Makhmudov was planted drugs and during search in his house leaflets of the party “Erk” were found. Keeping leaflets does not violate the law, however, that became one of the pretexts for criminal prosecution. Afterwards, he was held criminally liable upon groundless charges of “embezzlement”. He was then the Chairman of the Culture Foundation of Uzbekistan. Wide public response and international campaign in support of the writer influenced the authorities and he was released under an amnesty act.

Association for Human Rights in Central Asia petitions to all interested parties, organisations and mass media to take a stand and demand the release of Mamadali Makhmudov from prison.

In the past we issued: