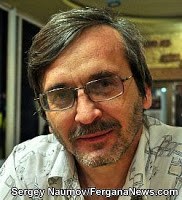 We urge the Government of Uzbekistan to immediately grant full due process rights to Sergei Naumov, the Uzbek journalist who was detained by authorities on September 21 and is being detained on a 12-day sentence for “petty hooliganism.”
The Uzbek government’s detention of Sergei is a misguided attempt to silence the Uzbek citizens who report on human rights abuses, including government-orchestrated forced labor in cotton production. The case raises serious concerns about the Government’s intentions to interfere with the International Labour Organization mission that began monitoring the cotton harvest days before Sergei’s arrest.
On 21 September, Sergei Naumov phoned a friend to say he had been arrested. For three days, the police refused to disclose his whereabouts. On September 24, Mr. Naumov’s colleagues obtained court documents that state he was convicted and sentenced for alleged verbal abuse and inappropriate contact with a woman on the street. Mr. Naumov denies the allegations, and the court ruling was based on witnesses who were unnamed and did not testify in court. After being detained incommunicado for three days, Mr. Naumov continues to be denied access to a lawyer or his family.
A week before Sergei’s arrest, 6-year old Amirbek Rachmatow suffocated under a pile of cotton, the third fatality in the first two weeks of this year’s cotton harvest. No one noticed little Amirbek sleeping in the trailer until the cotton had already been unloaded on top of him. The boy had accompanied his mother to pick cotton, to meet her quota, along with the hundreds of thousands coercively mobilized to the cotton fields by the Uzbek government this September. The world knows of such tragic impacts of the forced-labor system due to the work of Sergei Naumov and his colleagues, the journalists and human rights activists who document and report them, despite Uzbek government repression.
The Uzbek government’s incommunicado detention of Sergei fits a pattern of harassing and detaining human rights activists. Three days after Sergei Naumov’s arrest, authorities sentenced Bobomurad Razzakov, chairman of the Bukhara region branch of the Society for Human Rights in Uzbekistan “Ezgulik”, to four years imprisonment. During the 2012 cotton harvest, authorities arrested Gulshan Karaeva of the Human Rights Society of Uzbekistan and detained human rights activist Uktam Pardayev incommunicado for 15 days. In each case, authorities trumped up charges to silence another Uzbek citizen documenting and reporting on government-orchestrated forced labor.
We are deeply concerned about the fate of Sergei Naumov and all citizens of Uzbekistan working to hold their government accountable for the rule of law. We call on the Uzbek government to immediately grant Naumov access to independent counsel and permit him to contact relatives and friends. And we urge Uzbekistan’s international diplomatic and business partners to condition their relationships with Tashkent on its ending its human rights abuses, including wrongful detention and forced labor.
More reporting on Sergei Naumov’s case:
Association for Human Rights in Central Asia, http://www.ahrca.org/
Human Rights Watch, http://www.hrw.org/news/2013/09/24/uzbekistan-journalist-forcibly-disappeared
Organization for Security and Co-operation in Europe, http://www.osce.org/fom/105392
Reporters Without Borders, http://www.trust.org/item/20130923125113-rpyi0/?source=hppartner
Defenders Exploitation Uzbekistan