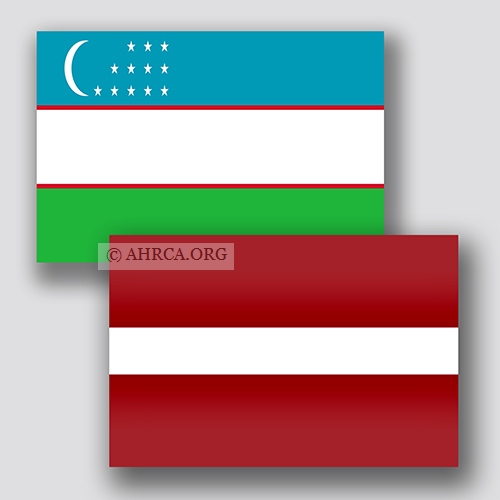 On 16-17 October 2013 the dictator of Uzbekistan, Islam Karimov, will visit free Latvia on an official visit.

The Association for Human Rights in Central Asia expects that Latvia will uphold, in its foreign policy, the principles of democracy and humanity that it declared.

According to information given by the Information Agency «UzReport», Heads of the States will meet "to exchange views on the gradual development of Uzbek-Latvian relations and international issues." The negotiations will be concluded by signing a joint statement and the package of documents to further strengthen bilateral political, trade and economic cooperation and relations in the field of transport, communications, environmental protection.

Who the Latvian President, Andris Berzins, will exchange views and discuss bilateral relations with?

First of all we would like to remind that Mr Islam Karimov is in power for more than 23 years – since April 24, 1990. In 2007, in violation of the Article 90 of the Constitution of Uzbekistan, which states that "one and the same person cannot be President of the Republic of Uzbekistan for more than two consecutive terms", he remained for a third presidential term. You can read more on the subject in our press release of 20 January 2008 entitled "The anti-constitutional Presidency of Islam Karimov has begun".

— On 13 May 2005 in the city of Andijan, on the orders of Islam Karimov, the government forces used indiscriminate and disproportionate force to suppress demonstrations, resulting in the deaths of hundreds of civilians, including women and children. Up to this day, the regime keeps innocent people behind bars just because they have witnessed the Andijan massacre and protest against human rights violations;

— According to our sources, there are more than 10,000 political prisoners in Uzbekistan. This number includes 30 human rights activists, writers, independent journalists, opposition party members, thousands of members of religious communities and organisations. They are deprived of liberty for the fact that their views differ from the official position;

— the convicted prisoners are systematically tortured and sexually abused in order to obtain false testimonies or to break their personality. Statistics on victims of torture and deaths in custody is blocked in every possible way. According to only our organisation, over the past 4 years, 28 people died under torture in custody. An investigation of any of these cases proved impossible;

— Information about the mass exploitation in the cotton sector of Uzbekistan has caused a great public outcry. Many companies, which have well-known brands, supported the call from human rights activists to boycott Uzbek cotton. Civil society activists have documented many cases of deaths and injuries during the cotton harvest in Uzbekistan, there are children among the victims. No one has been held accountable for the deaths and causing irreparable damage to the health of the victims of slave labour;

— opposition parties are denied the right to register and freedom to campaign;

— there is no freedom of speech and freedom of assembly in the country.

Latvia is a member of the European Union and its representatives take part in the assessment, of Uzbekistan’s performance of its obligations under international agreements in the field of human rights, carried out by the UN Human Rights Council and the Council of Ministers of the European Union.