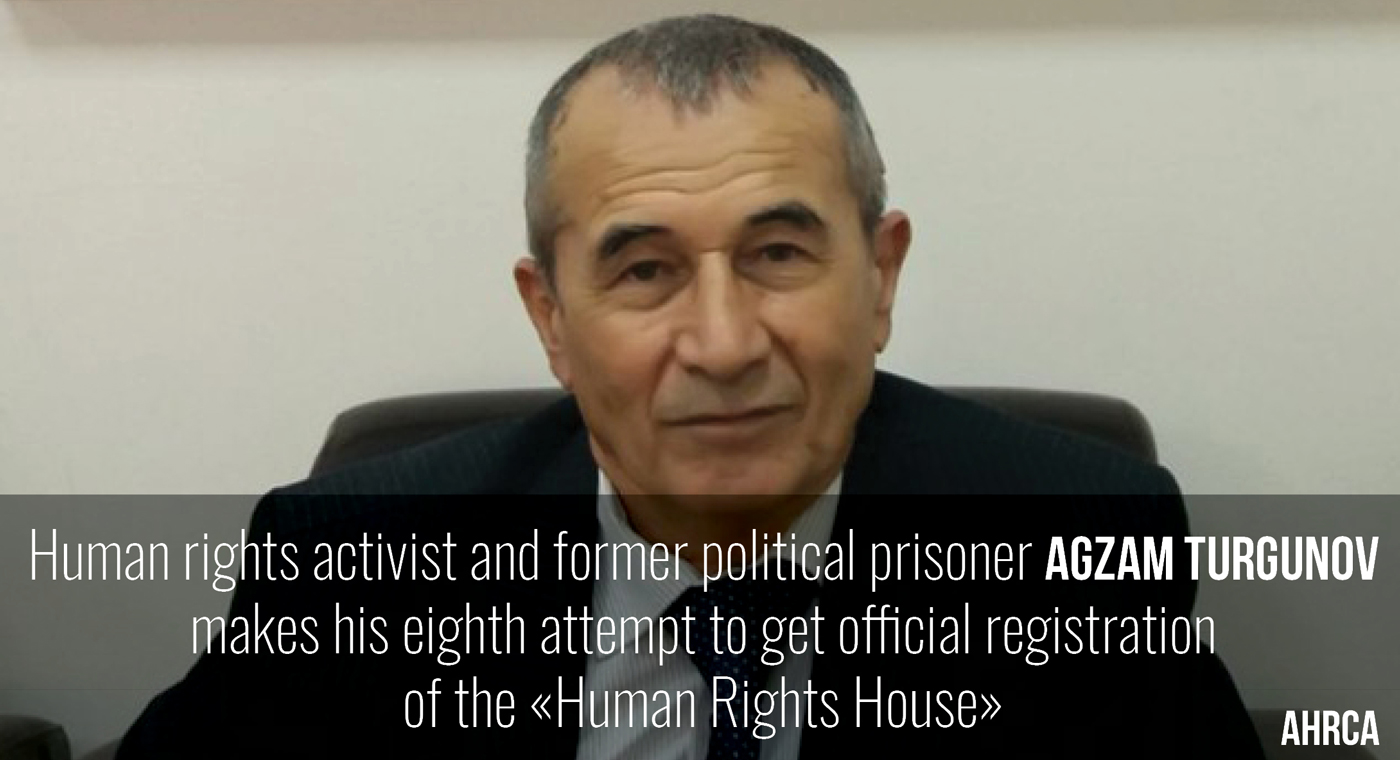 Later in June 2021 Agzam Turgunov, human rights defender and former political prisoner, and his colleagues will submit an application to register their human rights organization for the eighth time since February 2019. The applicants have diligently addressed all concerns raised by the Ministry of Justice and have engaged a lawyer to assist them. Other independent civil society groups have also had multiple applications for registration rejected on spurious grounds.

The government of Uzbekistan publicly claimed in February 2021 that there are over 10,500 civil society organizations in the country, but closer examination of these statistics reveals that the majority of them are in fact organisations that are not independent from the government.

In May 2020 the United Nations Human Rights Committee raised concern at “the small number of independent self-initiated NGOs registered in the State party, the high number of rejections for registration”.
“The authorities of Uzbekistan are clearly dragging their feet and searching for small technicalities to prevent independent human rights organizations from registering. Until such groups are able to register and allowed to monitor and document the human rights situation any talk of reform in Uzbekistan is meaningless,” said Brigitte Dufour, Director of International Partnership for Human Rights.
On 4 March 2021, President Shavkat Mirziyoyev approved the “Concept on Development of Civil Society in 2021-2025” and a Road Map for its implementation, setting out measures to address various issues important to civil society organisations, including the legal framework, partnership with state structures, state support, and civil society oversight of state bodies’ activities. However, the Concept fails to address an issue of central importance for independent civil society groups in Uzbekistan, namely the clarification of procedures and criteria that apply when registering NGOs.
The Ministry of Justice’s grounds for rejecting the applications by Agzam Turgunov and his colleagues were often unclear or unsubstantiated indicating that they were refused on politically motivated grounds. For example, the Ministry stated that the applicants had failed to:
— Number and stitch the pages of the charter correctly (rejection no. 2 in June 2019, and no. 6 in October 2020. Turgunov and his lawyer refute this and say the charter was presented correctly.
— Pay a fee for the consideration of the registration documents equivalent to the amount of four minimum wages (rejection no. 2). However, when the founders submitted the documents, the employee of the Ministry of Justice who checked them had told them that everything was in order and assured them that the fee could be paid later and they would be informed in good time.
— Pay the appropriate fee for registering the organization (rejection no. 3 in August 2019). This time the group paid the fee as advised in the previous rejection, but now the Ministry’s rejection letter pointed out that the fee was higher - 12.5 minimum wages – for groups that intend to not only operate within Uzbekistan. There was in fact an error in the Charter as the lawyer’s secretary wrote “in other countries” instead of “in other regions”.
— State where the group would conduct its activities and name the governing body submitting the application (rejection no. 3). These claims are inaccurate as the documents had been prepared by the lawyer and the Charter referred to NGO branches in four regions of the country.
— Abide by the Law on non-governmental non-profit organizations1 in connection with the group’s founding meeting, but no details were given (rejection no. 4 in March 2020).
— Submit the application in line with online registration procedures in place during the coronavirus pandemic (rejection no. 5 in July 2020). However, details about the procedure were not publicly available and requests by the group for clarification had gone unanswered.
— Attach the confirmation of payment of the registration fee (rejection no. 6 in October 2020). An employee of the Ministry of Justice had told Turgunov that the receipt of payment was valid for three months and therefore he did not pay a new fee.
— Meet the requirement of Article 17 “Charter of a non-governmental non-profit organization” of the Law “On non-governmental non-profit organizations”2 which requires NGOs and its sub-divisions to demonstrate the availability of sufficient funds (rejection no. 6). However, the founders of the organization had set up a fund (with donations from founders and supporters) of the amount of an equivalent to 3,000 USD to cover the required costs for two staff and office rent for a year, as required by law.
In the seventh and most recent rejection letter dated 7 January 2021 the Ministry of Justice claimed that Human Rights House had not sufficiently regulated the management of funds by the organization and its sub-divisions, and that it had failed to list its sources of funding. The Ministry’s letter provides no evidence for these conclusions. Agzam Turgunov and lawyer Sergey Mayorov maintain that they provided the requested information in the registration request.
Agzam Turgunov lodged the first three NGO applications under the name “Restoration of Justice” together with further founding members including human rights defenders Dilmurod Saidov, Azam Farmonov and Abdusaid Musayev. After the third refusal to register the group, these founding members left the organization and the others decided to rename the NGO to Human Rights House (or Inson Kukuқlari uyi in Uzbek or Дом Прав Чеовека in Russian).
Agzam Turgunov, the head of Human Rights House, and lawyer Sergey Mayorov reported that they met representatives of the Ministry of Justice on several occasions including the Minister of Justice Ruslan Davletov to discuss how to obtain registration. 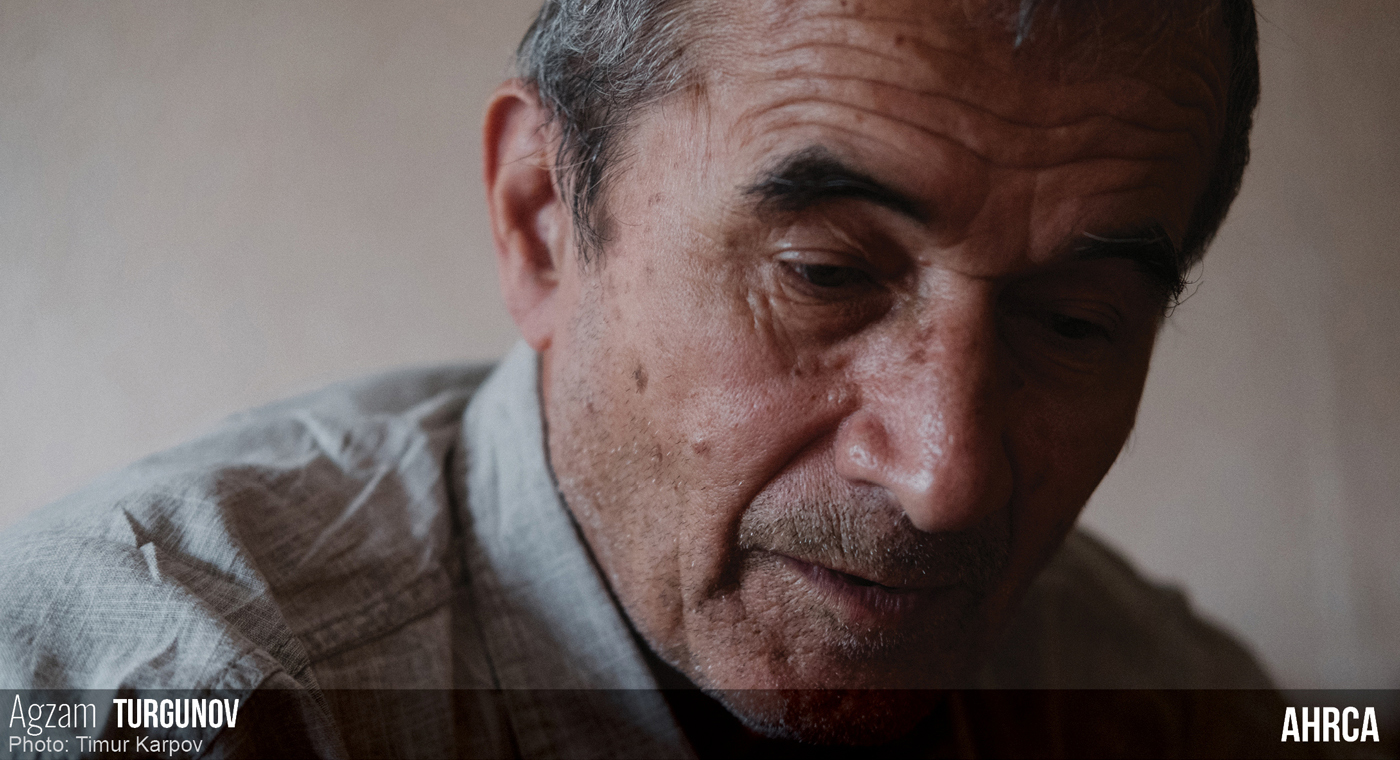 “Since Shavkat Mirziyoyev became President, I have noticed that the State Security Services are still interested in me, and so I asked the Minister of Justice Ruslan Davletov directly if this interest had influenced the decision to refuse to register the NGO. I found it amusing that he tried to dissuade me from registering and strongly recommended that I join the already registered Human Rights Society of Uzbekistan ‘Ezgulik’, saying that then it would be easier for me to protect human rights, which sounds strange when coming from the Minister of Justice”, Agzam Turgunov stated in January 2021.
After the seventh rejection by the Ministry of Justice, Agzam Turgunov has been searching several months for a guarantor willing to provide office premises – which is a prerequisite for registration. The previous guarantor, who provided a letter of guarantee for all the previous applications, stated that the State Security Services urged him to withdraw his support to Turgunov. Additionally, the founders of Human Rights House reported that each of them was visited by an officer from the State Security Services in order to verify the authenticity of their signatures in the application documents. Agzam Turgunov is also preparing documents to appeal the series of refusals to court, as he is afraid that the Ministry of Justice will again refuse to register.

“We see that public organizations are registered in Uzbekistan on a selective basis and that human rights defenders are still under the control of the special services, just like during the reign of dictator Islam Karimov. The lack of opportunities for the legalization of independent human rights organizations makes us question the authentic nature of the legal reforms announced by President Mirziyoyev in 2017”, notes Nadejda Atayeva, President of the Association for Human Rights in Central Asia (AHRCA).

We call on the Uzbekistani authorities to simplify the registration procedures for independent civil society organizations, to increase the transparency of the process, provide support and advice for citizens trying to register organisations, and welcome a constructively critical dialogue between civil society and the state as a key precondition for achieving meaningful improvement in practice of the human rights situation in the country.