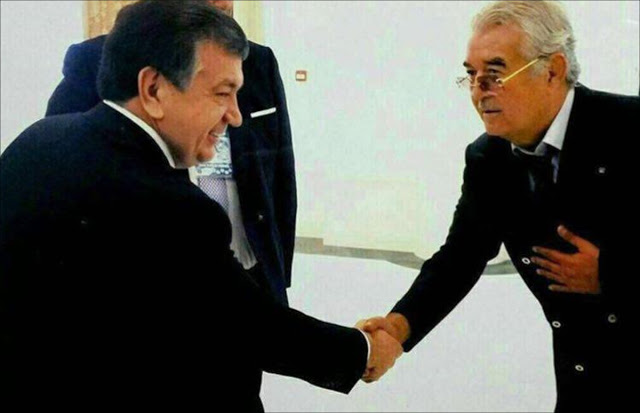 report
Presentation by Nadejda Atayeva at the European Parliament at an event entitled " How can the EU help in returning stolen assets?" 3 May 2017.
Dear Sirs,
I address those who are present here with respect for your principled position and would like to express my gratitude for this opportunity to speak before you.
Our discussion is essentially searching for effective mechanisms of eliminating the sources of corruption. Therefore, I want to draw your attention to a topic that has been studied very little so far – the role of organised crime in the political life of Uzbekistan. I would like to illustrate this topic with examples of the leaders of organised crime: Salimbay Abduvaliev and Batyr Rakhimov. They are known to the public as super-rich people with unlimited resources, and over many years they have managed to get preferential treatment from the Uzbekistani head state, which they have used for their personal enrichment. They maintain a monopoly over the most profitable spheres of the Uzbekistani economy, which serve as sources of corruption as well as other crimes.
According to Wikileaks, diplomatic cables of the former US Ambassador to Uzbekistan Jon Purnell state that Abduvaliev trades in public positions, whereas ministers of Uzbekistan, give generous gifts to Abduvaliyev's relatives, and the wives of state officials are seen to attend Abduvaliyev's celebrations. Information available to us confirms these observations.
There are signs that Abduvaliyev remains in the circle of individuals close to the ruling elite in Uzbekistan. He demonstrated active support for Shavkat Mirziyoyev in the last presidential elections. A photo of the mafia boss Salimbay and the President of Uzbekistan Shavkat Mirziyoyev shaking hands has been circulating on the Internet for almost half a year. Their handshake in public is a clear signal to society that Mirziyoyev gave the criminal boss the right to engage in his “business” under his patronage and on behalf of the state. It is worth noting that soon after the public handshake Salimbay was appointed to the position of Deputy Chairman of the Olympic Committee. Salimbay obtaining an official governmental position can be perceived as granting an official license for racketeering. The existence of a relationship between President Shavkat Mirziyoyev and Salimbay makes it clear that the new president of Uzbekistan has links to the transnational mafia.
Arguably, one of the reasons that Salimbay is able to continue his activities is his close ties with the National Security Service of Uzbekistan (SNB). He carries out tasks relating to the behind-the-scenes operations of this institution. The attempted assassination of the religious figure Obid Qori Nazarov in 2012 in Sweden demonstrates that the SNB supports Salimbay as a candidate for the position of leader of the sporting organization which serves as a cover for operations aimed at eliminating opponents of the ruling regime living abroad.
Abduvaliev acts through other figures of the underground business world, in particular Batyr Rakhimov. His name deserves special attention. A professional killer by the name of Yuri Zhukovsky was sentenced to life imprisonment in Sweden for the attempted murder of Obid Qori Nazarov. He confessed that he received $ 200,000 from Umid Aminov, (from the city of Bukhara), who is also known as Tigran Kaplanov on his Russian passport, for the attempting to assassinate the religious leader who had fallen out of favour. It transpired that for many years Kaplanov-Aminov has been on the payroll and in the close circle of the oligarch Batyr Rakhimov, who in turn is associated with Salimbay.
The attempted assassination of Obidkhon Nazarov by criminal elements at the orders of the Uzbekistani special services is not an isolated case. In October 2007, hired killers acting on the instructions of the National Security Service killed the well-known journalist Alisher Saipov in Osh (in southern Kyrgyzstan). In Turkey in 2014 Uzbek special services organised the murder of another religious figure, Imam Mirzagolib Khamidov, known among his followers by the name of Abdullah Bukhari. In all these cases, the names of two people come up: Kaplanov and tycoon Batyr Rakhimov.
As he works in the field of Uzbekistani sports Salimbay and members of his network can easily obtain visas and enter foreign countries, including the countries of the West where Uzbek refugees live. The visas also provide them with opportunities to take illegally acquired assets abroad. Salimbay or his subordinates arrange Schengen visas for these assassins under the guise of these sporting organizations and their international links.
Organisations such as Interpol, Europol and law enforcement agencies of countries where Uzbekistani refugees live should pay careful attention to these supposed sports officials and take adequate measures against them, as well as against the representatives of the Uzbek authorities associated with them.
Thank you for listening.
rule of law corruption