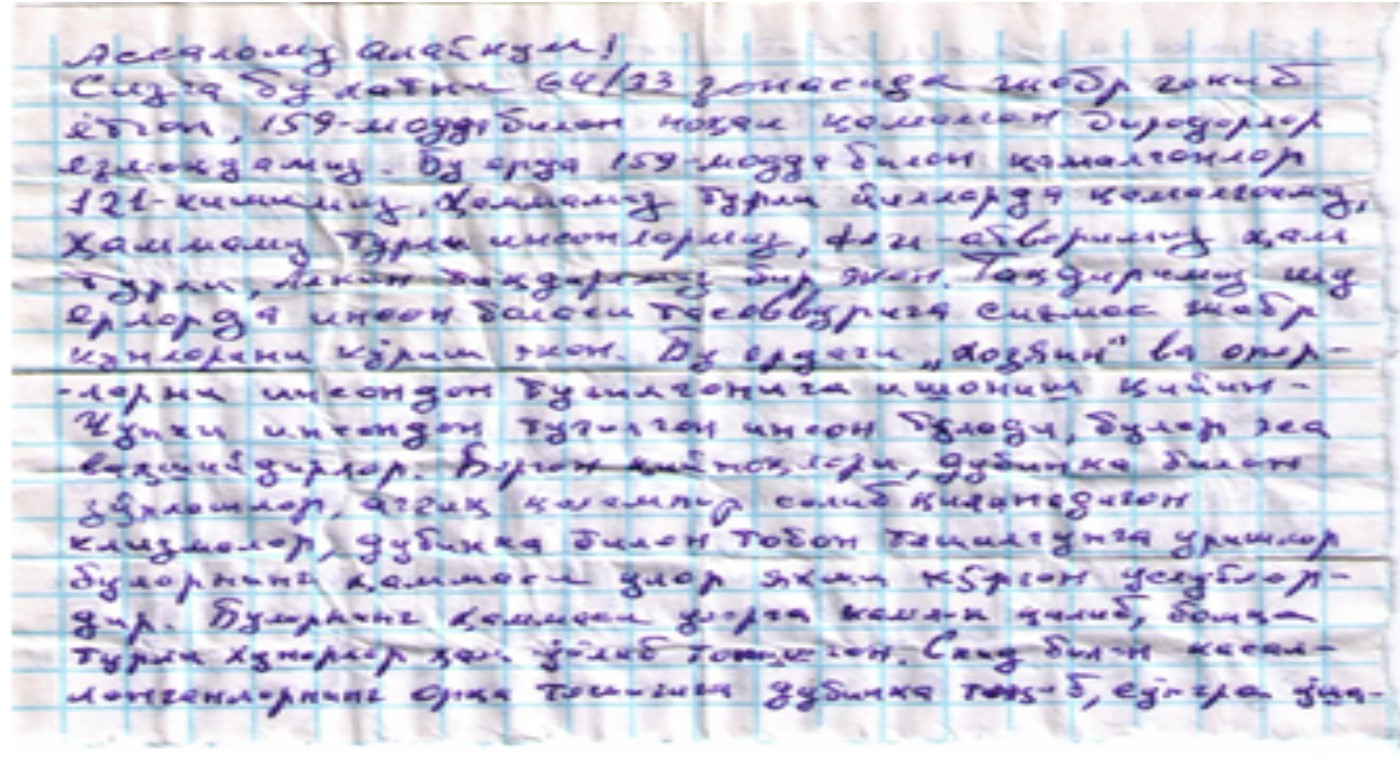 letters
Unofficial translation of the letter from Uzbek into Russian, translated by Association for Human Rights in Central Asia.
This letter was secretly passed from the colony with a strict regime N°64/33 (Karshi city, Kashkadariinskaya oblast) in July or August 2009 and received by Association for Human Rights in Central Asia” in December 2009:  "From the colony N°64/33 we write, those who were imprisoned on false charges and sentenced according to article 159 of the Criminal Code of the Republic of Uzbekistan. Here are 121 prisoners imprisoned according to article 159. We all ended up here in different years. We are all different people. Our characters are also different, but our destiny is the same. Our destiny has been pleased to see that man could never have imagined. Looking at these masters and prison-keepers it is hard to believe that they were born to women. Born a human being should remain human being. And they are - wild creatures and inhuman monsters. The pain they caused us is impossible to describe. They rape us with a club (stick), enema syringe with a red pepper; and beat on the heels till the blood. These are methods of violence they like. This all seems not enough to them, and they come up with various new methods of torture. They rape with sticks those who suffer from AIDS, and those same sticks they use to rape other prisoners. They laugh and say with a jeer: "You all pray, call each other “brothers”, and aren’t you ashamed to infect each other with AIDS?". In the medical unit for healthy people they use syringes which were previously used for patients with AIDS. To prisoner called Holmirza, who expressed indignation, they forcibly poured the blood of the prisoner with AIDS. Then Holmirza was transported to another colony, and it remains unknown to which one...
Dear friends! Mothers! Fathers!
Our torments are increasing, not diminishing. Torturers threw aside all restraints and became violent. They know that they will not answer for this under the law, but do not know that they will have to give an answer before God and its judgment. For certain reasons known to you we do not write our names. Consider that the letter was signed by 121 prisoners".
torture Political prisoners