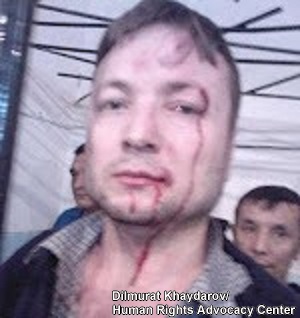 torture prevention
Based on material of the criminal case N°141-10-240.  It became known that on 25 January 2013 a criminal case against Dilmurat Khaydarov and others will be considered in the Osh City Court by the new panel of judges and a new prosecutor.
The criminal case N°141-10-240 will be considered in the first instance by the Osh City Court. In October, the aggrieved party has filed a petition for disqualification of the judge Pinzhamin Baybasunov and all the judges of the Court of Karasu. In turn, the defendants filed a counter petition against the Attorney M. Arynov. The judge granted both applications. The Osh Regional Court returned the case to the Karasu Court for consideration by the Karasu Chief Justice Koychubek Zhobonov, but aggrieved party disqualified him too.
On several occasions, the Karasu Criminal Court sent the case for further investigation because of defects admitted during the investigation by the prosecution. Although unable to provide the Court with strong evidence against them, the victims are seeking the life sentences for Dilmurat Khaydarov, born in 1973 and five other defendants: Bahodir Sabirov, born in 1976, Gani Sadikzhanov, born in 1974, Shukurullo Kochkorov, born in 1979, Khairulla Saipov, born in 1976 and Daniyar Kadirov, born in 1970.
Chronology of previous hearings at the Karasu Court
On 26 December 2011 the Karasu District Court ruled the criminal case to be sent for further investigation to address the shortcomings of the investigation. The prosecutor and the victims sent an appeal to the court of second instance, the Osh regional court.
On 16 April 2012 the Osh Regional Court quashed the ruling of the Karasu District Court and sent the case to the same District Court for a final verdict. The lawyers appealed the determination of the Osh Regional Court to the Supreme Court of the Kyrgyz Republic.
On 2 August 2012 the Kyrgyz Supreme Court upheld the determination of the Osh Regional Court to return the criminal case to the Karasu District Court. It is possible that the Supreme Court took this decision under the pressure of the victims. Recently, the public defender Ravshan Gapirov was attacked, the lawyers U. Usmanov and R. Muzafarov received threats.
Previously, when the Supreme Court sent the case back to the Court of the first instance, for a decision, it probably did not pay attention to the materials of the criminal case, despite the shortcomings of the investigation pointed out by the complaint of the defendants.
The Supreme Court imposes the responsibility for the decision on the Court of First Instance, fearing the reaction of the victims who are seeking the life imprisonment for Dilmurat Khaydarov and five other defendants.
The Judge P. Boybasunov is undoubtedly under a serious pressure. In late August 2012 the Judge P. Boybasunov was considering another criminal case on the riots. In this case, the victims openly displayed belligerence against Boybasunov for the fact that he did not deliver a sentence of life imprisonment. Then the victims broke the bars of the cell where the defendant were held and burned the Judge’s computer.
On 31 October 2012 the Karasu District Criminal Court held a hearing on the case of Khaydarov and others. On that hearing the aggrieved party challenged the judge and expressed non-confidence in the whole panel of the court.
The Association for Human Rights in Central Asia - AHRCA calls all interested individuals, organisations and the media to draw attention to the case of Dilmurat Khaydarov and promote objective and thorough judicial investigation.
Previous publications:
- Dilmurat Khaydarov: «In those days of the conflict, I even thought that they will declare gratitude, but it turned out to be the opposite», 14 June 2012;
- Dilmurat Khaydarov: «I love Kyrgyzstan, believe in its civilised future, but no one listens to me!», 14 February 2012.
Kyrgyzstan Kyrgyzstan June 2010