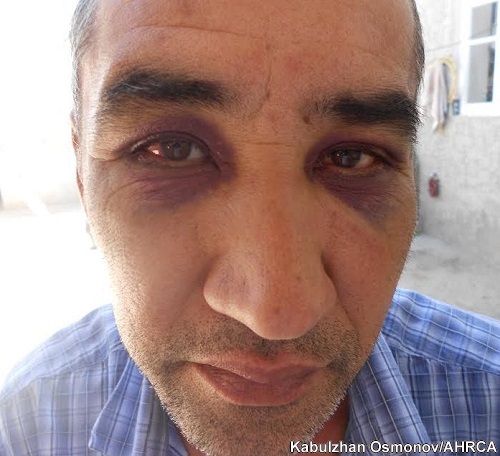 Osh, another attack motivated by ethnic hatred on an individual

Kabulzhan Osmonov was born in the south of the Kyrgyz Soviet Socialist Republic in 1970, a citizen of Kyrgyzstan, an ethnic Uzbek. He resides in the Navoi Street and works as a caster at the Osh Pump Plant.

On August 4th, 2014 at 12:30 pm Kabulzhan Osmonov was returning from lunch break to work at the Osh Pump Plant on Absamatov Masaliev Prospect. At the gates of the company he was stopped by an unknown young man of Kyrgyz appearance who addressed him, saying, "Hey Sart, stop!". Osmonov stopped and immediately received a few strong blows from the stranger to his face and other body parts.
Kabulzhan Osmonov managed to escape into the factory and get away from the attacker, but was immediately caught up with a few more men of Kyrgyz appearance. Since Osmonov was punched in the face, he does not know exactly how many attackers were there. The Nationalists kicked him with all their force, delivering blows all over Osmonov’s body, until he lost consciousness.
After learning of the attack, the director of the Osh Pump Plant urgently organised a transport to take the victim Osmonov to an A&E unit. He was given first aid, but was refused admission.
Osmonov lies at home with severe headaches and numerous bruises. He does not have money for treatment. The company where he works, pays him for the job by the jobs completed, and does not pay for sick leave.
On August 5th, 2014 Kabulzhan Osmonov wrote an explanatory statement at the office of the district inspector of the Osh City Police Department (located on Akbura Street).
Law enforcement agencies have not yet instigated a criminal case on the fact of Kabulzhan Osmonov sustaining injuries. Investigator relied on the absence of the forensic medical examination. This forensic conclusion is still not issued after three weeks, which delays the investigation of the crime. During a call, the investigator was willing to answer our questions. And said that it is easy to find the attackers, as they have a surveillance camera record of the hotel "Beijing" in front of the scene. But he is convinced that Kabulzhon Osmonov suffered a crime not motivated by ethnic hatred. The investigator said that many ethnic Uzbeks find it almost easy to claim that the attacks on them were ethnically motivated.
According to recent reports available to the Association for Human Rights in Central Asia, the case of the attack on Kabulzhon Osmonov is not an isolated incident when the nationalists 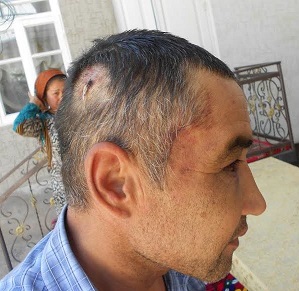 can avoid liability for crimes motivated by ethnic hatred.
On August 16th, 2014 in the morning at a wholesale market on the west side, where they sell melons, an ethnic Uzbek was severely beaten. The victim refused to give a statement to the prosecutor in relation this attack, because he believes that it is useless. At the request of the victim, we do not disclose his name. Last year also, he was beaten on basis of ethnic hatred, and because of threats from his attackers he took the blame. The victim gave the inspector a bribe of 20 thousand soms, to get his statement back and the criminal case closed.
On August 17th, 2014, about 20:00 hours, in the city of Osh a TV journalist of the "Intimak TV", Davran Nasibhanov, became the latest victim of ethnic hatred. He went out to buy some bread, and he was approached by 4 people of Kyrgyz appearance in the street near the "House Services", where there are retail shops. They blocked his way and demanded money from him. When Davran refused to pay them, they first insulted him verbally and then beat him up very severely. As a result, he suffered a broken rib, a concussion and numerous bruises. Davran Nasibhanov asked for help in Osh city hospital where he was treated and questioned on what had happened to him. When the hospital learned that he had been attacked on the grounds of ethnic hatred, they refused to admit him to the hospital. The official reason given was lack of available beds.
On the basis of the information available to us, the Association for Human Rights in Central Asia concludes that the attacks on ethnic Uzbeks often are not investigated, because they are recorded as "hooliganism." The attempts of the victims to bring the perpetrators to justice are turned against them and create even more stress in the society.
Kyrgyzstan Central Asia