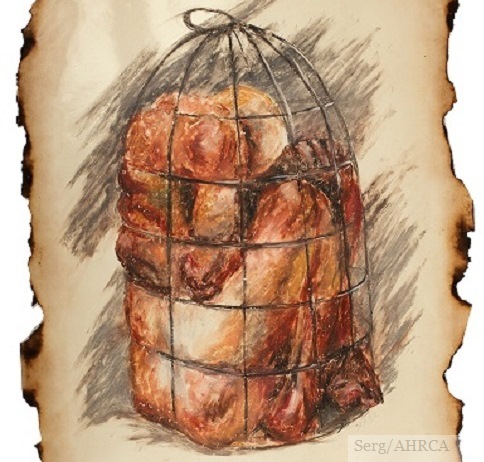 The defendant Khayrulla Saipov is detained in the Pre-Trial Detention Centre No. 5 of the city of Osh. Doctors diagnosed him with cirrhosis of the liver.
At the last Court hearing, he could barely stand. The necessity to call an ambulance is becoming more and more frequent, so are the acute episodes of bleeding. Saipov is in urgent need of constant medical care.

They are accused of killing the tax inspector Azhimamat Seitov and robbery during the ethnic conflict in southern Kyrgyzstan in June 2010. The body of the tax inspector is not yet found, but the prosecutor, without providing evidence of the crime, maintains that Seitov was killed. All defendants could face life imprisonment.

Khayrulla Saipov is detained on charges under the following Articles of the Criminal Code of the Republic of Kyrgyzstan: art. 233, parts 1, 2, 3 (organisation, participation, calls to active insubordination of the lawful requirements of the representatives of the authorities); art. 168, part 2, paragraph 2, part 3, sub articles 1, 2 (robbery); art. 172, part 2, paragraphs 2, 3 (misappropriation of a motorcar or other vehicle); arts. 30-97 (complicity to murder).

Saipov was arrested on 26 June 2010. The investigation lasted two months, then, 5 times, his case was sent back for further investigation. During the investigation, Khayrulla was tortured, one can say that the investigators almost danced and jumped on his stomach. Saipov warned them that he had hepatitis, but they did not pay attention to it. He was also struck on the head with a rubber club, electrocuted, a plastic bag was placed on his head and he was choked. Currently, he is seriously ill, doctors diagnosed him with cirrhosis of the liver.

On 13 January 2013, in Pre-Trial Detention Centre ? 5 of the city of Osh, the prisoner Khayrulla Saipov’s throat bled. The ambulance doctors examined him and said that it is a manifestation of cirrhosis of the liver. He was taken to the hospital for an emergency treatment, and then returned to his cell.

On 25 January 2013, at the trial of the Osh City Court, he was very weak and could hardly stand. Saipov’s health deteriorates by every day.

The Association for Human Rights in Central Asia - AHRCA calls the Osh City Criminal Court to transfer the accused Khayrulla Saipov under house arrest or hospitalise him immediately, so that he could have access to the constant medical care.