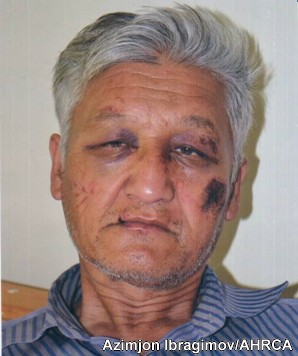 The Osh City Prosecutor’s Office conducted a Supervisory Review of Azimjon Ibragimov’s complaint regarding an attack on him two months ago.
On 1 September 2014, at 05:30 AM, near the “Khasiyat” mosque of the Osh city, an ethnic Uzbek, Azimjon Ibragimov, born in 1951, was attacked. He was going to the mosque for the Morning Prayer. He was unexpectedly approached by three young Kyrgyz looking men who addressed him as “You Sart”; he then came under a sudden physical attack by them.
Azimjon Ibragimov sustained two broken ribs, a concussion and multiple bruises and was forced to seek medical care at the Department of Traumatology of Osh city hospital.
Soon Kyrgyz authorities found out about this attack on basis of the ethnic animosity. But the investigation really started only after intervention of the State Commission on National Policies and with assistance of “Freedom House”, “Human Right Watch”, the OSCE and other international organisations.
On 21 October 2014 the Chief Prosecutor E. Asratov of the Osh City Prosecutor’s Office said that he conducted a Supervisory Review of Alimzjon Ibragimov’s case instigated on his complaint about an attack on him and took the case under his control in accordance with Article 34 “Competence of the Prosecutor in conducting criminal matters” of the Criminal Procedural Code of the Republic of Kyrgyzstan.
The Association Human Rights in Central Asia expresses its gratitude to all the organisations who assisted Azimjon Ibragimov’s cause and hopes that the law enforcement agencies will do everything possible to bring the perpetrators to justice.
Freedom to express