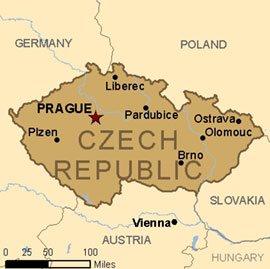 The Department of Refugee and Migrant Policy of the Ministry of Internal Affairs of the Czech Republic shall not extend the period of stay for refugees on its territory, when in the passport of the mother, there is not attached a photograph of their newborn children.

Including for those refugees, for whom it would be necessary to go to the embassy of the country from which they are being pursued. It is known that there are no fewer than 40 cases in which the Czech Republic contributed to the disclosure of the whereabouts of refugees.

In the Czech Republic, on the birth or death certificate, including those of foreign nationals are issued by the state agencies – on the municipal level. If a child is born to a family of asylum seekers, whose applications are under consideration, the municipality informs the embassy of the family’s country of origin. Should the applicant be refused asylum, and the applicant repeatedly asks for asylum, he/she will be forced to apply to the embassy of his country in order to attach the record of the birth of the child to the mother’s passport.
In 2006-2008, employees of embassies of Central Asian countries in the Czech Republic, without question, attached photographs of children born outside of the country of their parents, into the passports of the parents. However, then diplomats began to ask why the families are located overseas.
After 2008 when 200 refugees from Kazakhstan held a picket in Prague demanding a decision to deport them the Kazakhstan authorities compiled a list of members of Muslim communities in Western Kazakhstan. According to the refugees, this list was put together by the Kazakhstan Embassy in the Czech Republic from the records of newborns in the passports of their parents. Since that time, through their relatives in Kazakhstan, they pressured the refugees to voluntarily return back to their country.
Uzbekistan is similarly pursuing its citizens who remain overseas longer than the maximum allowed length of time (2 years). Violators face imprisonment for between 5 to 10 years under Article 223 of the Penal Code (illegal exit abroad or illegal entry into the Republic of Uzbekistan). This category of individuals is charged with a formal violation of Article 223. The fact is that should they return to their country of origin, they can be charged with a crime. The misinterpretation of this article is in violation of Article 12 of the International Covenant on Civil and Political Rights (right to freedom of movement).
Our organization received statements from refugees from Central Asia and their relatives indicating that the registration of births and deaths of foreigners in the Czech Republic poses a threat to the relatives of refugees who remain in their country of origin. We are aware of cases in which the latter were forced to travel to the Czech Republic to try and urge the refugees to return to Kazakhstan.
Several families have already left the Czech Republic and live in another EU country, concealing their whereabouts from their relatives in Kazakhstan. But based on the Dublin Agreement, they may face deportation to the Czech Republic. Then, since 2006, no one from this group of applicants was granted refugee status as an individual facing religious persecution. The Czech Republic still gives this group of refugees the right of residence only on humanitarian grounds, even if the applicant has been a victim of torture. And those who remain in the Czech Republic, which register the birth of their child, do so stating that their child is a person without citizenship. But the Department for Refugee and Migrant Policy of the Ministry of Internal Affairs began to express their complaints that refugees have ceased to follow their system, in which they are to specify the citizenship of their newborns.
The Convention obliges the state not to disclose information which provides asylum seekers, including those about his whereabouts and did not encourage refugees in contact with the authorities of the country which pursues them.
The Association for Human Rights in Central Asia (AHRCA) calls on the Czech Republic to amend the system of registration of births and deaths of foreigners temporarily residing on its territory. Registration procedures should be harmonized with the obligations of the Czech Republic to enact the UN Convention on the Status of Refugees.  The Convention obliges the state not to disclose information they are provided by asylum seekers, including information about his/her whereabouts, and does not force refugees to contact the authorities of the country which pursues them.
torture Refugees