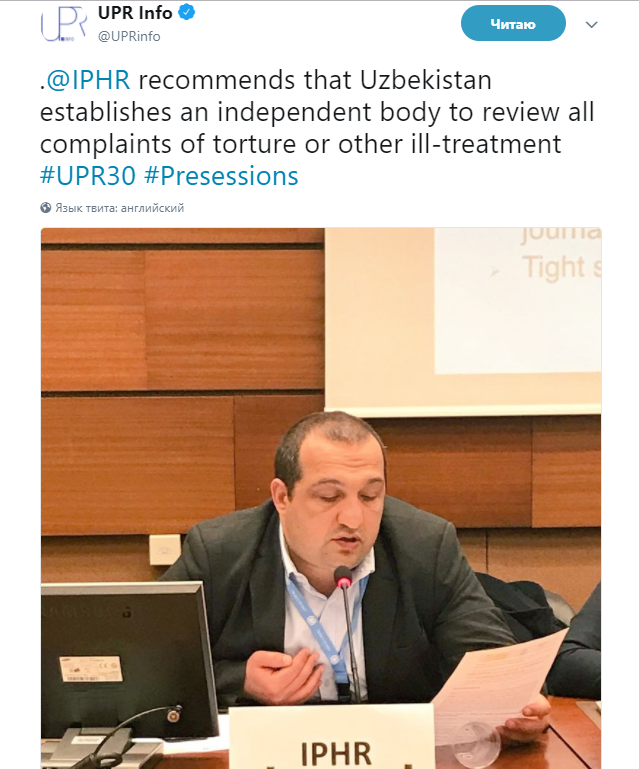 On 11 April 2018 the International Partnership for Human Rights, Association for Human Rights in Central Asia and Amnesty International delivered a statement during the pre-session for the UN Universal Periodic Review (UPR) of Uzbekistan’s human rights record to be held in Geneva, Switzerland, in May 2018. The organizations highlighted some of the main concerns, including violations of freedom of expression and association and torture and other ill-treatment, and called on the representatives of Permanent Missions to the UN to raise these concerns with the Uzbekistani authorities.
Statement delivered at the UPR Pre-session 30: Uzbekistan
Dear representatives of Permanent Missions,
I am speaking on behalf of International Partnership for Human Rights, Association for Human Rights in Central Asia and Amnesty International, all of whom prepared submissions for the review of Uzbekistan.
During the last UPR, Uzbekistan received 203 recommendations of which it accepted 145, of which it considered 30 as already implemented, and rejected 58.
Since coming to power, President Mirziyoyev [Mirzioiev] has taken some positive steps to facilitate external scrutiny of the situation in Uzbekistan, such as allowing visits by the UN High Commissioner for Human Rights and the UN Special Rapporteur on freedom of religion or belief, and some international human rights organizations to Uzbekistan. Under the President’s leadership Uzbekistan has also eased certain restrictions on freedom of expression and the media, undertaken a programme of judicial reform to ensure judicial protection for the rights and freedoms of citizens, and released a number of government critics, including human rights defenders and opposition political activists, who served long prison sentences on politically-motivated grounds.
However, research by our organizations show that the government has failed to implement key recommendations from the last UPR with respect to accountability, freedom of expression and association, and freedom from torture and other ill-treatment. I will highlight some of our main concerns:
Freedom of expression and association:
Uzbekistan has failed to comprehensively address unwarranted restrictions on civil society's ability to exercise their fundamental rights to freedoms of expression, assembly and association, and we remain deeply concerned by the ongoing politically-motivated persecution and imprisonment of human rights defenders, independent journalists and government critics. Tight state controls on NGO registration, funding and activities, coupled with ongoing restrictions on freedom of expression and access to information, prevent independent media outlets and human rights NGOs from operating effectively and safely in Uzbekistan.
We urge Permanent Missions to address the following key recommendations to Uzbekistan during its upcoming review:
Torture and ill-treatment
Despite the President's judicial reform efforts and his November 2017 decree explicitly prohibiting the use of torture to obtain confessions and their admission as evidence in court proceedings, judges continue to ignore or dismiss allegations of torture or other ill-treatment as unfounded, even when presented with credible evidence in court. For example, in a recent case a judge invoked the President’s decree and ordered an investigation into torture allegations made by two independent journalists after they presented credible evidence in court that they had been tortured to compel them to confess. However, the investigation was not independent, impartial and thorough, and concluded that it was impossible to establish the cause of the defendants’ injuries. Nevertheless, the judge admitted the confessions as evidence. The procedural violations which occurred, when both defendants were held for substantial periods of time in incommunicado detention heighten concerns that the investigation into their torture allegations was flawed.
We urge Permanent Missions to address the following key recommendations to the government of Uzbekistan:
More information and recommendations on these and other issues can be found in our reports.
Thank you for your attention!
Download the report here
rule of law torture defenders Uzbekistan