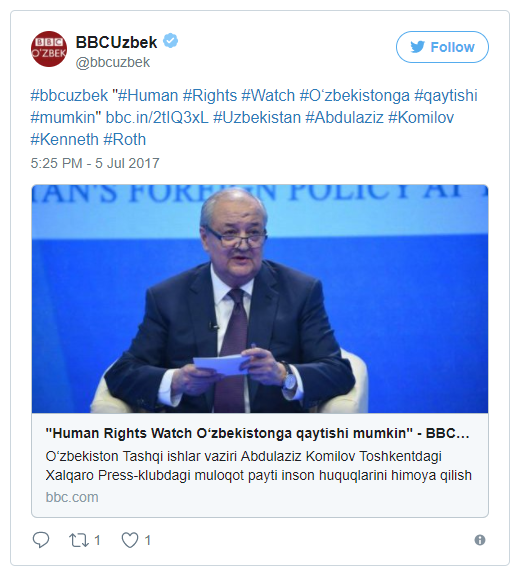 International Partnership for Human Rights (IPHR) and the Association for Human Rights in Central Asia (AHRCA) prepared this most recent update on Uzbekistan.
A TENTATIVE OPENING?
On 5th July, the Minister of Foreign Affairs, Abdulaziz Kamilov, announced that the government would welcome a Human Rights Watch (HRW) delegation to Uzbekistan, tentatively indicating a level of willingness to open up the country to international human rights monitoring. HRW's activities have been suspended in Uzbekistan and its researchers have been denied access to the country since 2014. In a written response, HRW stated that "it values the government's readiness to take this step to engage" and looks forward "to making plans to visit the country in the near future".
In another development earlier this year, Kamilov announced that the request for re-accreditation of the BBC’s Uzbek service, which was forced to leave the country in 2005, is under review. At the beginning of July, the BBC advertised for a correspondent based in the capital, Tashkent.
From 10th to 11th May 2017, UN High Commissioner for Human Rights Zeid Raad Al Hussein visited Uzbekistan to meet with the president, government officials and representatives of non-governmental groups. His was the first such visit by a High Commissioner for Human Rights. Al Hussein urged the government to demonstrate concrete progress on promoting human rights by releasing political prisoners, cooperating with UN rights monitors and working to end systematic torture. The Commissioner also recommended that Uzbekistan cooperate with UN human rights bodies, noting that none of the 14 UN human rights monitors who have asked to enter the country has been allowed to visit since 2002.
The law on freedom of conscience and religious organisations was one of the first to be adopted after Uzbekistan declared its independence in 1991. In practice, however, the law does not protect the right to freedom of religion. Over the last two decades, representatives of religious organisations and communities have been victims of repression for politically-motivated reasons. This repressive state policy has exacerbated radicalisation, increased emigration and led to cases of torture and ill-treatment. In many situations, people have been accused of terrorism or encroaching on the constitutional order, without objective evidence, and some have served lengthy prison sentences just for practicing a belief or belonging to a religious denomination. Even after their release, former prisoners and their families remain under the authorities' surveillance.
The pattern of persecuting people on religious grounds has impeded citizens from fully exercising their right to freedom of association. The Uzbek authorities have arbitrarily imprisoned thousands of Muslims and key independent religious leaders who practiced their religion outside strict state control over the last two decades, solely on the grounds of ensuring national security.
During his above-mentioned visit to Uzbekistan in May, the UN High Commissioner on Human Rights announced that the country had extended an invitation to the UN Special Rapporteur on the freedom of religion and belief. On 15th June, Uzbek President Shavkat Mirziyoyev held a video conference with over 10,000 Imams and religious community leaders in Uzbekistan, calling for a reexamination of cases in which Muslims were convicted on religious grounds and later “blacklisted”. According to the press, the president acknowledged that some Muslims had been imprisoned and prosecuted for “small mistakes”. Mirziyoyev stated that special commissions comprised of representatives from the Ministry of Interior, security services and the Prosecutor’s Office, as well as Islamic representatives and local authorities, would be established in each region to review such cases and provide support to victims. AHRCA and IPHR will continue monitoring the situation and report on further developments.
The public response to a situation of alleged bullying resulting in a student's death illustrates the evolving nature of civic engagement and public demonstrations in Uzbekistan.
On 3rd May 2017, 18–year old Jasurbek Ibragimov was severely beaten by individuals presumed to be fellow students, not far from the Tashkent Medical College Borovsky. He was hospitalised but passed away on 1st June as a result of the injuries he had sustained. Bullying persists in educational institutions in Uzbekistan but such incidents are often ignored or covered up, as complaints from students or parents are perceived as reflecting badly on the educational system.
Ibragimov's death shocked the public and led to an online petition signed by over 19,000 people demanding that those responsible be brought to justice. The petition was delivered to the Cabinet of Ministers, Prosecutor General's Office and the Ministry of Internal Affairs. In addition, on 4th June over 200 people gathered at a spontaneous rally in Dustlik Park in Tashkent to sign the petition and call for justice in Ibragimov's case. Footage from the gathering can be viewed below.
The case of a student's untimely death, though horrifying and reprehensible, represents a rare and timely reaction by the Uzbek authorities to a public outcry. While attending the public rally on 4th June, Deputy Chief of the Tashkent Internal Affairs Directorate Donier Tashkhodzhaev promised that action would be taken. A criminal investigation into Ibragimov's death was subsequently initiated, and a number of suspects are currently being investigated under Article 104.3 of the Criminal Code. Ibragimov's parents were promptly given legal advice and the Prosecutor General is overseeing the investigation. Local media has also covered the case in-depth, providing the public with timely and official information.
Though citizens freely rallied and organised a petition, the security services attempted to pressure those involved in coordinating the online petition. When the regional news agency Fergana, which is banned in Uzbekistan, reported on Ibragimov's case and started a Facebook public page entitled: “Questions! Why no answers? (Uzbekistan)”, the security services reportedly questioned the organisers of the petition, rally participants and those who commented on the Facebook page. It is alarming that publicising the case on an independent media outlet and through social media resulted in pressure on those who took action to ensure justice for Ibragimov.
The state's pattern of persecuting and imprisoning human rights defenders, journalists and critics of the regime in Uzbekistan persists to this day. Examples of such persecution are as follows:

In June 2017, the relatives of wrongfully-imprisoned Uzbek human rights defender (HRD) Nuraddin Jumaniyazov reported that he had died in detention on 31st December 2016. Jumaniyazov founded the Human Rights Center “Mazlum”, and in 2012 helped set up the Union of Independent Trade Unions to Support Labour Migrants. In January 2014, he was arrested, charged with trafficking of persons and sentenced to eight years and nine months imprisonment after a trial deemed unfair. Jumaniyazov had been unable to see his lawyer since his unsuccessful appeal against his sentence in April 2014. In February 2017, penitentiary authorities informed his lawyer, Polina Braunerg, that Jumaniyazov had been transferred to the prison hospital and that she would finally be able to meet him. At no point was Braunerg informed that her client had died two months before. Given the Uzbek authorities' harassment of prisoners' relatives, it is possible that Jumaniyazov’s family came under pressure from the authorities to keep silent about his death and not even inform his lawyer. Jumaniyazov suffered from severe diabetes and was insulin-dependent. He was last seen in public at the appeal hearing in April 2014, during which he asked his lawyer to help him get medicine to treat his illness. The exact circumstances surrounding his death remain unknown.
DIRE CONSEQUENCES OF TRAVEL BANS
As previously highlighted by IPHR and AHRCA, those who openly criticise the authorities are often banned from travelling abroad, even in cases of needing urgent medical care.
In the case of human rights lawyer Polina Braunerg, restrictions on her travel had tragic consequences. Braunerg, who was disabled and wheelchair bound, suffered from diabetes and high blood pressure. She died on 19th May 2017 after suffering a stroke. Despite several appeals to the Department for Visa and Registration (OVIR) since 2014, Braunerg had repeatedly been refused permission to travel abroad for medical treatment. She had complained to the Prosecutor’s Office about the travel ban, but the authorities' pressured her to withdraw the complaint. In February 2017, she again applied for an exit visa but was refused. After Braunerg’s death was publicised, her son, Nikita Braunerg, reported being followed by the security services and that his neighbours were questioned about him.
Former Member of Parliament Murad Djuraev, who was released from prison in November 2015 after completing a 21-year sentence on politically-motivated charges, is in need of urgent spinal surgery but has not been given permission to leave the country. On 11th June 2017, Djuraev’s wife wrote to the presidential virtual complaints service, explaining that Djuraev could travel to Germany for the spinal surgery and that he had applied to Kashkadarya Department for Visas and Passport registration (OVIR). OVIR usually issues an exit visa within 20 days, but Djuraev’s application has been under consideration since 24th April 2017. After writing to the presidential complaints service, Djuraev was summoned to the police where an official read him excerpts from what he said was an official but classified document – a Ministry of Interior order stating that anyone previously convicted for serious crimes must remain under administrative supervision for 15 years and that the right to travel abroad is given only at the end of this time, and not after one year as stated in applicable legislation (the law on administrative supervision). Djuraev was not given a copy of this document after his release and he continues to face pressure from the security services and other law enforcement agencies. His children are reportedly facing discrimination in employment and the authorities have used surveillance on his family.
Former Editor-in-Chief of the opposition newspaper Erk, Muhammad Bekjanov, who was released from prison in February 2017 after serving his sentence, has also been pressured by the authorities for speaking out. Bekjanov requires urgent medical treatment as his health is very poor after spending 17 years in prison suffering from tuberculosis, an inguinal hernia and loss of teeth. Currently, he is unable to travel even to Tashkent for longer than three days, as he no longer has a registration permit there .(It was withdrawn in 1999 when the state repossessed his flat). His health is deteriorating day-by-day and he is hardly able to move. AHRCA and IPHR learned in June that on 26th April 2017, Bekjanov received a passport, but has not applied for an exit visa to travel abroad for medical treatment, as a local police head unofficially told him that persons under surveillance are not permitted to travel abroad even for medical treatment. Bekjanov’s wife and children live in the United States and he has not seen his children for 19 years and has never seen his grandchildren. He currently lives with his brother in the Aral Sea region and must register with the police every ten days and receives regular visits from law enforcement officials. After giving an interview to an independent online publication on his experience under investigation and in detention, his mobile and internet lines have been regularly cut off.
In June 2017, Uzbek artist Vyacheslav Akhunov announced a new online initiative to protest the restriction on his right to travel. In January 2012, Akhunov was refused an exit visa to leave Uzbekistan after he criticised Gulnara Karimova, daughter of late President Islam Karimov, on the Fergana news agency's website. Despite his appeals, he has not yet obtained permission to leave. Akhunov’s protest, “My Oregon Salem”, describes an imaginary life in the Promised Land, among flowers of paradise, on the shores of the ocean. Salem is the capital of the state of Oregon in the United States. At the same time Salem sounds close to Salam – which means “peace to you” in Arabic. He describes imaginary events in his life in America, choosing homes to buy, flying to give lectures at various events, visiting museums, gardening. His virtual life transcends the limitations imposed by the Uzbek authorities on his fundamental human rights and freedoms. He writes: “[President] Mirziyev also refused me permission to travel abroad. I am not able to attend exhibitions where my works are presented. But I can still resist this regime virtually and imagine my free world, where I cannot be forbidden and restricted".
Political prisoners Uzbekistan