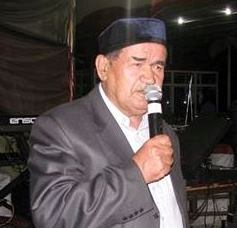 On 5 November 2014 Rajabboy Bobojon passed away. He was born in 1937 and lived in city of Urgench of the Khorazm region of Uzbekistan all his life.
R. Bobojon worked for 40 years as a correspondent of Radio of Uzbekistan for the Khorazm region. He won the confidence of a large audience with his witty and relevant reports. In all his reports he always showed difficult life situations of ordinary citizens which resulted in him being perceived by the authorities as a dissident. People quote him when criticising the officials for their inaction.
Rajabboy Bobojon was and will remain a role model for his children and grandchildren. His three sons Shukhrat, Kudrat and Khurmat Babajanovs became journalists and are being prosecuted by the Islam Karimov regime for their works. R. Bobojon always supported his sons’ professional position. The State TV channels of Uzbekistan many times showed libellous films about them. He was very proud for bringing them up to be independent and courageous in such closed and repressive society. Shukhrat, Kudrat and Khurmat Babajanovs had to leave Uzbekistan because of a threat of imprisonment. Their father was very sensitive to this forced separation.
Rajabboy Bobojon’s family always highly valued freedom of expression and opinions. The father even had to go through a forced separation from his sons and grandchildren for the love of these ideals. Shukhrat, Kudrat and Khurmat Babajanovs continued working as journalist abroad. Their loss is made even greater because the Karimov regime did not give them any chance to say goodbyes or give the last rites to their father.
The team and members of the Association for Human Rights in Central Asia express their condolences to the family of Rajabboy Bobojonon.
We cherish his memories.
Freedom to express