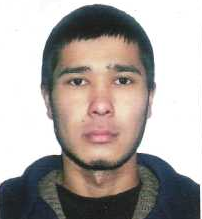 Location of Davron Komoliddinov, a citizen of Uzbekistan, remains unknown for the last five months.
On 3 April 2015, Davron was detained in the city of Krasnoyarsk of Russia following a request of Uzbekistan to extradite him. His family is not able to find him either in Russia or in Uzbekistan.
Davron Ortikovich KOMOLIDDINOV was born on 14 April 1991 in the Uchkuprik District of the Fergana Region.
Uzbek law enforcement agencies became interested in him as early as 2012. As it transpired later, two citizens of Uzbekistan, with whom he communicated in Russia, testified against Komoliddinov. Following their returned from Russia to Uzbekistan, they were detained on 3 October 2012.
In the course of 2013, Uzbek criminal investigation officers regularly visited Davron Komoliddinov’s home and coerced his family to give information about his location.
Russian law enforcement agencies informed Davron Komoliddinov’s family that he is not in the territory of the Russian Federation. They are not able to obtain any information about him in Uzbekistan either.
Association for Human Rights in Central Asia (AHRCA) sent a report to the UN Working Group on Enforce or Involuntary Disappearances.
torture Uzbekistan