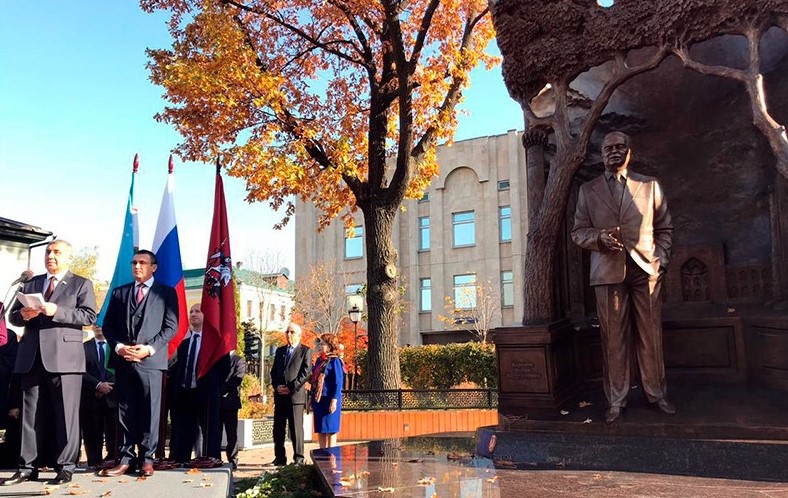 An open letter from Uzbek human rights activists to the British sculptor Paul Day, commissioned to commemorate former President Islam Karimov in December. The sculpture is due to be placed outside the Uzbek embassy in Moscow.
Dear Mr Day,
Thanks to the man you plan to celebrate with your latest sculpture, none of us have been able to visit our homeland for many years. During Islam Karimov’s reign of terror, we lost loved ones, family members, friends. Brutal crackdowns by the security forces he controlled have denied countless of our fellow Uzbeks the kind of reunion captured by your talented work, the Meeting Place at St Pancras station.
You must already know that Karimov ordered the massacre of hundreds of peaceful protesters in Andijan in 2005. It is unlikely we will ever know the exact number, because he had the bodies hidden in mass graves. Those who tried to show them to the world were silenced.
You must know that before he died in 2016, Karimov subjected millions of people, including young children, to slavery in the cotton fields. That he imprisoned thousands of real or imagined opponents. That he had them tortured, sometimes to death. That he attacked artists who dared venture into politics and imposed strict censorship on the media, social sciences, literature and arts. These are the values you will be celebrating with your homage to his legacy.
How much are you being paid to heroise a monster, Mr. Day?
You should know that the money you receive for this sculpture is dirty money. Karimov and his family abused their power to steal millions, if not billions of dollars from the state. They extorted lavish bribes from Western companies seeking to do business in Uzbekistan. His eldest daughter, Gulnara Karimova, extorted hundreds of millions of dollars in bribes from international telecom companies. She laundered this money through dozens of offshore companies. Now the US has placed Gulnara Karimova on the Magnitsky sanctions list and her assets have been frozen.
The Islam Karimov Foundation paying you was formed by his younger daughter, Lola Karimova-Tillayeva. Its purpose is to whitewash her family’s soiled reputation. Let us tell you where her money comes from. Under Karimov, Lola’s husband Timur Tillayev mysteriously gained control of Abu-Sahiy, a huge wholesale market in Tashkent. For years, they paid a meagre $625,000 in tax a month on this business empire. With Karimov gone, the market was wrested from the Tillayevs’ control in November last year. In the first two weeks of December alone, the market generated around $4.4 million in taxes, suggesting they were paying only a fraction  of the taxes due.
We are campaigning for the Uzbek authorities to dig deeper into the origins of the Tillayevs’ wealth. We suspect they will discover evidence of tax evasion and money laundering. If they do, the Foundation and any payments to you will come under the spotlight. Should the assets be frozen, you may never be paid in full.
Yet money should be the least of your worries. What of your artistic legacy?
One of your most famous works, Battle of Britain, pays tribute to the men and women who risked their lives to save civilians from Adolf Hitler’s bombing campaign. Liverpool is raising $2.5 million to build your Battle of the Atlantic Memorial. We assume you would not taint their legacy and yours by building a homage to Hitler. Why are you risking it with this celebration of a modern mass murderer?
In 1991 you received a Prince’s Trust Award. The Taylor Foundation Prize in 1993. Lauréat of the Susse Foundry Prize in 1999 and an Honorary Doctorate at the University of Gloucestershire. We will be writing to each, as well as the Liverpool City Council, to ask if they still endorse an artist prepared to memorialise a dictator, a killer and a suppressor of artistic freedoms.
We urge you to reconsider and to pull out of your arrangement with the Karimov foundation.
Sincerely,
Nadejda Atayeva,  Association for Human Rights in Central Asia, resident of France, n.atayeva[at]gmail.com
Umida Niyazova, Uzbek-German Forum for Human Rights, resident of Germany, umida.niyazova[at]gmail.com
Jodgor Obid, former political prisoner, poet, member of the International Pen-Club (Austria), resident of Austria
Ulughbek Haydarov, journalist, former political prisoner, resident of Canada
Daniel Anderson, former political prisoner, Association for Human Rights in Central Asia, resident of Norway
Kudrat Babadjanov, Uzbek journalist, editor of Eltuz.com, Sweden
Alisher Abidov, Association for Human Rights in Central Asia, resident of Norway
Anvar Usmanov, journalist, resident of Germany
Mirrahmat Muminov, Association for Human Rights in Central Asia, US resident
Dilobar Erkinzoda, Uzbek refugee, resident of Sweden
Salahaddin Usmanov, political emigre
OpenDemocracy
rule of law Freedom to express