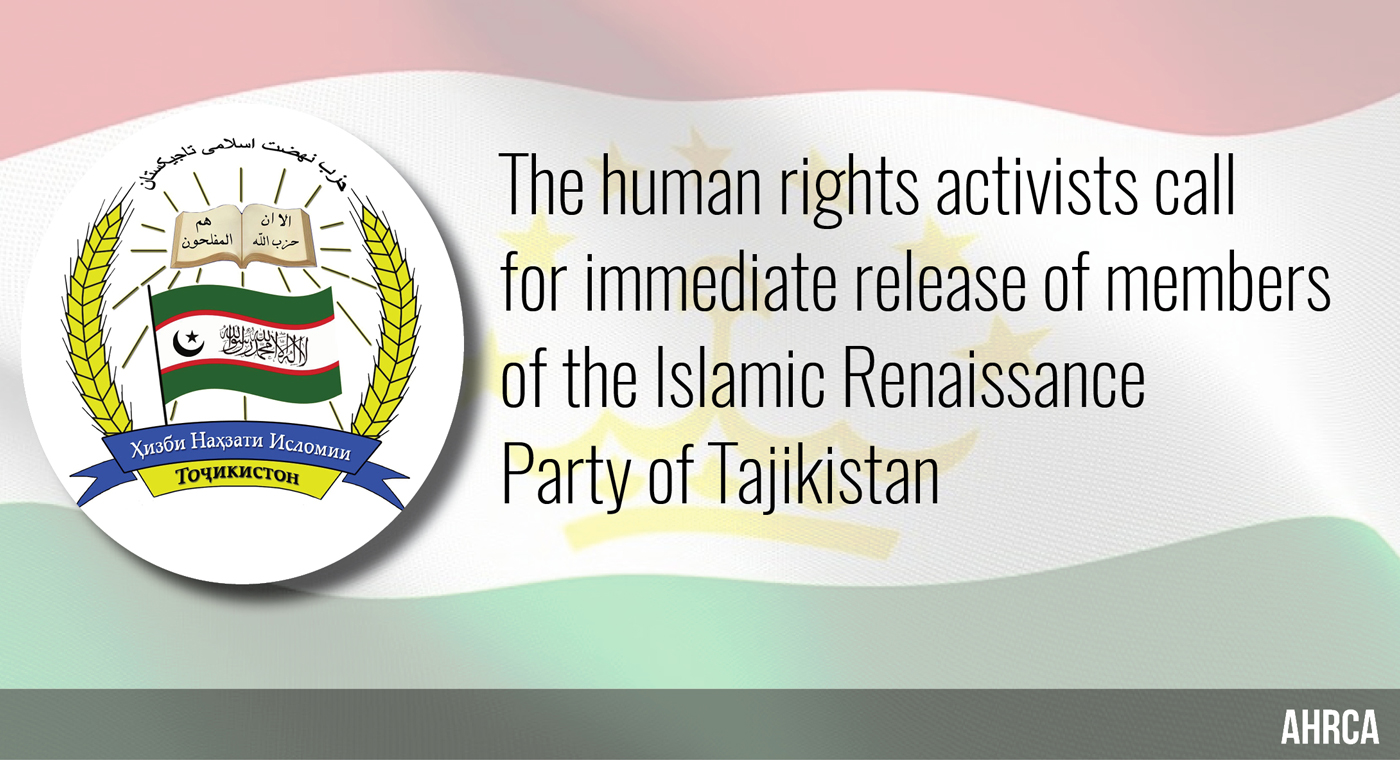 US, EU Should Protest Deepening Crackdown

(Washington) – Tajikistan’s Supreme Court sentenced leaders of the Islamic Renaissance Party of Tajikistan (IRPT) on June 2, 2016 to lengthy prison terms on charges of attempting to overthrow the government, Human Rights Watch, the Norwegian Helsinki Committee, and the Association for Human Rights in Central Asia said today. The sentences, including two life terms, followed an unfair trial initiated in retaliation for their peaceful political opposition and reflect the government’s pervasive manipulation of the justice system and egregious violations of the right to freedom of expression.

The US, EU member states, and Tajikistan’s other international partners should respond to the sentences with targeted punitive measures against Tajik officials unless concrete human rights improvements are made, including setting aside the opposition leaders’ convictions.

“If allowed to stand, these draconian sentences will not only strike a blow to Tajikistan’s peaceful opposition but to every Tajik citizen,” said Steve Swerdlow, Central Asia researcher at Human Rights Watch. “These sentences show that anyone in Tajikistan any time can be labeled a criminal and punished simply for disagreeing with the government.”Following a politically motivated trial, the Supreme Court sentenced the IRPT’s first deputy and deputy chairmen, Saidumar Husaini and Mahmadali Hayit, to life in prison.  Rahmatulloi Rajab, Sattor Karimov, Kiyomiddini Azav, and Abdukahhori Davlat, other party leaders, all were sentenced to 28 years in prison. The senior IRPT legal adviser, Zarafo Rahmoni, the only woman among the defendants, was sentenced to two years.Other sentences were: Zubaidullohi Rozik 25 years; Muhammadalii Fayzmyhammad, 23 years; while Vokhidhoni Kosiddin and Sadiddini Rustam, 20 years; Hikmatulloh Sayfullozoda, editor of the now banned IRPT newspaper “Najot,” 16-years; Muhammadsharif Nabiev and Abdusamad Gayratov, 14 years.Several of the defendants, including Hayit and Rahmoni, are well-known in Tajikistan and internationally for their many years of peaceful advocacy on human rights, freedoms of expression, assembly, and religion.While the Social Democratic party is also part of the opposition, IRPT was by far the largest and most viable opposition party in Tajikistan. Group 24, a peaceful opposition movement made of activists mainly outside the country, has also been persecuted and declared a terrorist organization by the government.The trial, which began on February 24, was closed to observers and marked by serious violations of due process. Sources close to several of the defendants told Human Rights Watch that several defendants were subjected to torture or ill-treatment in pre-trial detention. Several lawyers who attempted to represent the IRPT leaders on trial, such as Buzurgmehr Yorov, were detained on trumped up charges. A lawyer who represented one of the defendants and was present in court throughout the trial told the Association for Human Rights in Central Asia (AHRCA) that the government presented no evidence of the defendants’ guilt, citing the allegations made in the indictments as established facts.“The only purpose of this trial was to dress up political repression in the trappings of legal proceedings,” said Nadejda Atayeva, president of the Association for Human Rights in Central Asia. “The defendants’ crimes appear to be fabricated, yet their fate was pre-determined. This is a travesty of justice.”On June 2, the day the verdict was handed down, the wives of several defendants announced they would hold a peaceful protest and walk to the local United Nations office to seek a consultation on the sentences. As the women proceeded toward the UN building, police detained them. They were fined for an administrative violation of “failure to obey police.”Authorities began to arrest IRPT leaders and party members on September 16, 2015, accusing them of involvement in an alleged attempted coup earlier that month, purportedly by deputy defense minister Abduhalim Nazarzoda. Party officials, including IRPT’s chairman, Muhiddin Kabiri, and Hayit, the deputy chairman, repeatedly rejected accusations that the party was involved with or supported the alleged mutiny by Nazarzoda.Days before the arrests, Tajik authorities formally banned the party, forcing its closure and later declared it a terrorist organization amid a long-running campaign to stamp out opposition political activity in the country and among activists abroad.Tajikistan is in the midst of the worst political and religious crackdown since the end of the country’s 1992-1997 civil war. Over the past two years, authorities have arrested, imprisoned, and tortured members of the country’s peaceful political opposition. They have also targeted perceived critics abroad, seeking their detention and extradition back to Tajikistan, and have forcibly disappeared critics abroad only to have them reappear in Tajik custody.Authorities have also targeted lawyers, journalists, and ordinary citizens who have posted statements critical of the government of President Emomali Rahmon on social media. Hundreds of perceived critics and their family members have fled the country, according to observers’ estimates.  Constitutional changes accepted in a May 21 referendum tightened President Rahmon’s grip on power, effectively giving him unlimited presidential terms and extending a ban on the IRPT.The United States, the European Union, and other key international actors should make unequivocal calls for the defendants’ release, Human Rights Watch, the Norwegian Helsinki Committee, and the Association for Human Rights in Central Asia said. The international actors should press the Tajik government to uphold its international obligations to respect freedom of association, assembly, expression, and religion and impose targeted punitive measures, such as asset freezes and visa bans, on Tajik government officials responsible for imprisoning peaceful activists, torture, and other grave human rights violations.On April 15, the State Department designated Tajikistan a “country of particular concern” with respect to religious freedom, allowing the US government to sanction the country, and although the administration declined to do so, it can alter its decision and impose sanctions now, and press allies to do the same.“Tajikistan’s international partners should publicly and unanimously condemn this mockery of justice,” said Marius Fossum, Central Asia representative of the Norwegian Helsinki Committee. “Tajikistan’s human rights situation has been spiraling downward at a rapid pace and the time has come for Washington, Brussels, and all actors to examine the possibility of enacting targeted punitive measures unless immediate human rights improvements are made.”