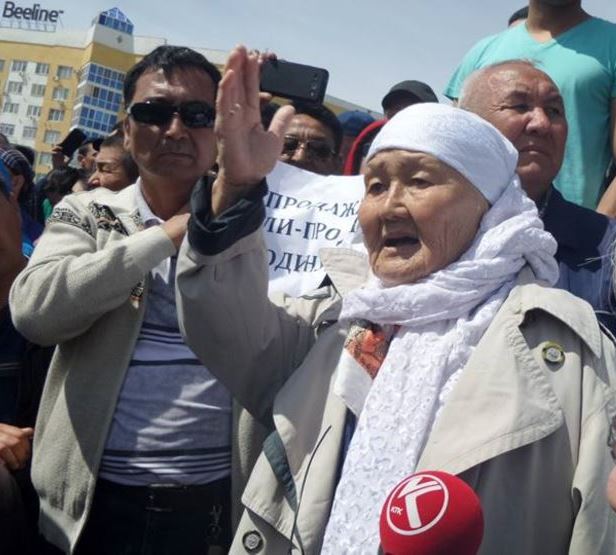 Authorities in Kazakhstan must immediately release all peaceful activists arrested ahead of planned protests on May 21, the Norwegian Helsinki Committee, Adil Soz, International Legal Initiative and Association for Human Rights in Central Asia said in a statement today.

This week Kazakhstani authorities have arrested several leading activists ahead of planned country-wide protests against a new land reform, the groups said. Activists and social media users have been arrested in Astana, Almaty, Atyray, Shymkent, Uralsk and Semey. Authorities have pressed criminal charges against at least two activists, whereas numerous others have been sentenced to up to 15 days of administrative detention.

“Arresting activists and social media users for expressing their intention to participate in peaceful protests is a clear violation of Kazakhstan’s international obligations. The authorities must immediately release all arrested activists and ensure every citizen the right to freedom of expression and the freedom of assembly,” said Bjørn Engesland, Secretary General of the Norwegian Helsinki Committee.Public demonstrations initially started in western Kazakhstan, in the city of Atyrau on April 24 as a protest against amendments to the land law. The new legislation would allow foreigners to lease farm land for up to 25 years, which protesters fear will effectuate that Kazakhstani land will permanently befall foreigners. From Atyrau the protests quickly spread to other cities in western Kazakhstan, such as Aktobe, Aktau and Uralsk. Within a short time similar rallies were manifested in numerous cities across Kazakhstan including Astana, Almaty, Zhanaosen, Kizilorda and Semey. The demonstrations have so far drawn a considerable number of protesters, which is highly uncommon in Kazakhstan where broad public participation in public protests is a rare occurrence.“The wave of arrests shows the Kazakhstani authorities’ disregard for freedom of assembly. We call on the authorities to allow the planned peaceful protests to take place in line with international human rights standards,” said Aina Shormanbaeva, President of the International Legal Initiative.President Nazarbaev responded to the protests on May 5 by announcing a moratorium on the new legislation. Dissatisfied with the moratorium activists in several cities applied to local authorities seeking permission to hold protest rallies on May 21. Following the subsequent denial from the authorities to hold protest, numerous activists and social media users across Kazakhstan nonetheless expressed their intention to participate in protest rallies across Kazakhstan on May 21.In response to the calls for public protests on May 21 the authorities launched a wave of arrests on May 17 that still continued when this statement was published. Activists and outspoken social media users were arrested in several cities, including Astana, Almaty, Semey and Uralsk. At least 24 people have been arrested or detained after expressing their intention to take part in the planned May 21 protests, or after applying to local authorities for permission to hold protests.“The authorities are using administrative detention as a tool to silence activists and outspoken voices”, said Tamara Kaleva, President of the Adil Soz foundation. “This sends a chilling message to every citizen of Kazakhstan – that openly expressing your views in social media can land you behind bars. Kazakhstan must stop the current crackdown on freedom of expression”, she added.Whereas most of the arrested activists are held in administrative detention, several activists face criminal charges as well. In Uralsk, local activist and musician Zhanat Esentaev is currently under arrest on suspicions of “incitement of social, national, clan, race, class or religious discord”. Esentaev had prior to his arrest applied to local authorities for permission to hold protests in the public square of Uralsk on May 21. In connection with Esentaev’s case, other local activists have the status as witnesses, but may potentially risk criminal charges themselves. In Astana authorities have raised criminal charges against activist Makhsat Ilyashev, although the details of the charges remain unknown, according to Radio Azzatyk. Furthermore, authorities have interrogated several other activists on charges of organizing mass-disorder.Although the Constitution of Kazakhstan guarantees the right to peaceful assembly, the legal framework regulating such activities poses numerous obstacles to public protest. According to Kazakhstani law, would-be protesters must apply for a permit from local authorities no less than ten days in advance of the planned protests. Furthermore, the application can only be submitted by registered groups, not individuals, and the organizer carries responsibility for security during the event. The law also restricts where a meeting may be held: Public protests are not permitted where it may disturb transport, pedestrians or general infrastructure. Furthermore, it is forbidden to hold meetings outside the offices of public services, such as those providing water, gas or electricity, or outside offices of health or educational administrations, and close to buildings important to state defense or security. Also, meetings may not take place near railroads, ports or airports. Naturally, any spot in any city center will be in proximity of at least one of the above mentioned.Internationally, Kazakhstan has received criticism for its restrictive approach to freedom of assembly and association. After a visit to Kazakhstan, the United Nations Special Rapporteur on the Rights to Freedom of Peaceful Assembly and Association, Maina Kiai, last year expressed criticism of Kazakhstan’s practice and legal framework related to public protests. In his statement Kiai said that “in Kazakhstan today the freedom of assembly is treated as a privilege, or a favor, rather than a right”. Furthermore, the United Nations Human Rights Committee also ruled last year that Kazakhstan must review its legislation “in particular the Law on the Order of Organization and Conduct of Peaceful Assemblies, Meetings, Processions, Pickets and Demonstrations”.“The arrests of civil society activists as well as the total control over anyone expressing their intention to participate in the planned peaceful protests, is a manifestation of political repression”, said Nadejda Atayeva, President of the Association for Human Rights in Central Asia. “We call on the Kazakhstani authorities to end its undue interference in fundamental freedoms as guaranteed by the Constitution of Kazakhstan, and to amend the legal framework  as ruled by the United Nations Human Rights Committee last year”, she added.