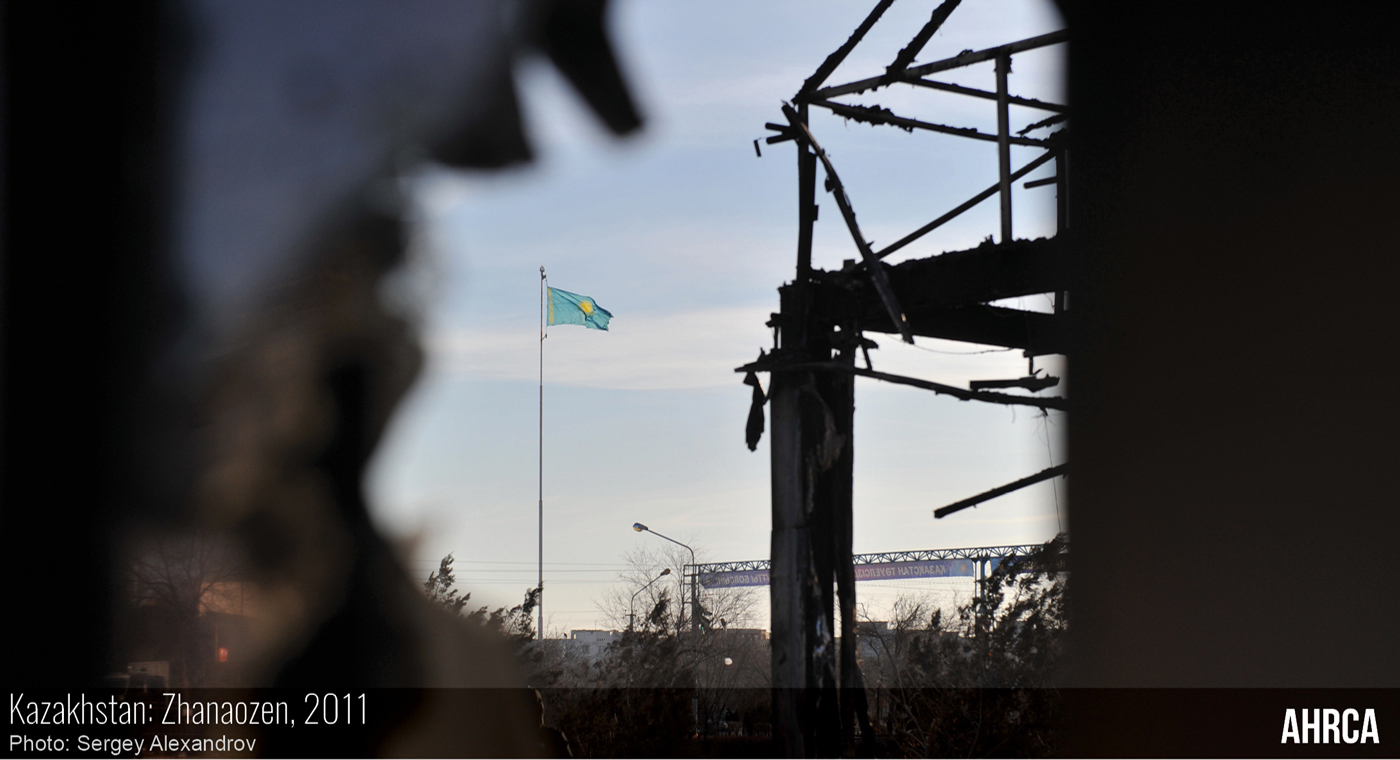 We express our condolences to the families and dear ones of the victims
December 16, 2011 in Kazakhstan, the government forces used firearms indiscriminately against people who were in the central square of Zhanaozen. Among the victims were workers of oil and gas enterprises "Ozenmunaygaz", owned by the Kazakh oil company Exploration and Production JSC "KazMunayGas" (50%) and Chinese oil company CNPC (50%)).
According to official information, 14 died in clashes, 86 were wounded. According to witnesses, the number of victims is several times more.
We have a preliminary list of the persons who died as a result of excessive use of force:
1. Kubaidullaed Baibek, born 21.07.1989;
2. Ayazov Shadiyar Eljanovich;
3. Ongarov Serik Alpysbaevich, born12.11.1959;
4. Yusupov Radik Rasulovich, born 1987;
5. Turganbaev Amanbek Torekhanovich, born 7.05.1984;
6. Kusherov Janabergen Jaymukhanovich, born 16.11.1979;
7. Duysekenov Atabergen Khasanovich, born 27.10.1987;
8. Abdikarimova Janar, born 11.04.1974;
9. Kusherov Rakhat, born 11.03.1995;
10. Munaubaev Nurlan Duysenbaevich, born 8.01.1982;
11. Kulkhairov Atabay Burebaevich, born 19.07.1967.
The names of other victims have not been established yet.
Parade, announced by the authorities on the Independence Day of Kazakhstan turned into a provocation. And in addition to the participants of civil protest people who came out to the parade also suffered from violent reprisal.
As a result of arson such buildings akimat (administration) of Zhanaozen, hotel "Aruana" , one of the offices of JSC "Ozenmunaygaz" and motor vehicles were damaged and destroyed.
We are deeply concerned that the Kazakh authorities are blocking information about the number and names of the dead, wounded and arrested. According to witnesses, there are mass arrests; Attorney General confirmed the detention of 60 people. Relatives are not informed about the location of the detained. The police do not take statements about finding the missing. In the evening of 16 December people were forcefully put on two “Ikarus” buses and taken in an unknown direction. Their names and whereabouts are unknown.
Relatives of victims, witnesses of the tragic events, the citizens disseminating reliable information, and independent journalists are subjected to unacceptable pressure.
The tragedy occurred at the backdrop of the open-ended act of civil protest of oil and gas industry workers of the Mangistau region (western Kazakhstan) started on 11 May 2011. They defend their right to decent work. Their demands remain the same:
Over 7 months passed since then, but the Kazakh authorities are unwilling to engage in the dialogue with striking oil workers, terrorizing activists of independent trade unions and critics of the regime. Thus, the Kazakh government violates:People of Kazakhstan were celebrating the 25th anniversary of the events, which took place in Almaty on 16-18 December 1986, and which went down in history as Zheltoksan, (in Kazakh Zheltoqsan is “December”). They were peaceful protests of the citizens brutally suppressed by militia and troops. Authorities did not allow the independent investigation of those events. According to the U.S. Library of Congress, at least 200 people were killed or executed later. Other sources claim that the death toll was even greater - from 1,000 to 2,000. However, it was not possible to confirm these figures. According to independent sources, some 3200 police and military personnel were engaged in the violent suppression of peaceful civilian protests . Thus, historical experience shows that obstacles to investigate massacre lead to their repetition at a later stage.
The provisions of the ratified International Covenant on Civil and Political Rights: Art. 19 (right to freedom of expression), Art. 21 (freedom of peaceful assembly), Art. 22 (freedom of association);
19 International Labour Organization conventions, including the fundamental ones:
– The Convention N°81 (1947) "On Labour Inspection", under which the state represented by the State Labour Inspectorate is obliged to take measures in case of violation of human rights in the work place;
– The Convention N°87 (1948) "Freedom of Association and Protection of the Right to Organize," according to which the state is obliged to allow and recognize the unions of workers, set up by them to protect their legitimate interests;
– The Convention N°98 (1949) "On the Right to Organise and Collective Bargaining", under which employers must negotiate with workers' representatives, and the state should be the guarantor of the consultation process;
– Convention N°111 (1958), "On discrimination (Employment and Occupation)," which prohibits discrimination based on race, colour, sex, religion, political opinion, national extraction or social origin, which leads to nullifying or impairing equality of opportunity or treatment in employment and occupation.
Association for Human Rights in Central Asia calls
The Government of Kazakhstan:
- to create conditions for an independent inquiry into the tragic events in the city of Zhanaozen the station of Shetpe (Mangystau region);
- to stop impeding the free flow of information about them;
- to start a dialogue with the striking employees of the holding "ERSAI Caspian Contractor";
- to reinstate laid-off workers and activists, who demanded respect for fundamental labour rights;
to release from custody all prisoners and detainees of union leaders, active participants and supporters of the strike;
- to cancel the convictions against union leaders and activists: a) lawyer of the trade union of JSC "Karazhanbasmunai" Natalia Sokolova, sentenced to six years of imprisonment for "inciting social discord" and b) the trade union leaders and activists - Kuanysh Sisenbaeva, AkzhanatAminov, and Natalia Azhigalieva and others;
- to conduct investigation into the murder of a young trade union activist, a worker of oil company "MunayFieldService" (Zhanaozen) ZhaksylykTurbaev (before his death he had received threats in connection with his trade union activities);
- to initiate a permanent tripartite negotiations and consultative process involving the State Labour Inspectorate, employers and independent trade unions representing workers' interests;
International Labour Organization:
- to establish an independent commission of experts to resolve the industrial dispute and prevent such confrontation in the future;
Governments of democracies:
- to urge the government of Kazakhstan to allow an independent investigation into the tragic events in the city and the  station Zhanaozen Shetpe in the Mangistau region;
Kazakhstan:workers of the video portal "Stan.Kz" sustained gunshot wounds
Kazakhstan:unprecedented pressure on the participants and supporters of the workers’strikes
Kazakhstan:authorities are up to violent reprisals against oil workers on strike
Kazakhstan:inactivity of the authorities pushes oil industry workers to suicide!
Kazakhstan Freedom to express