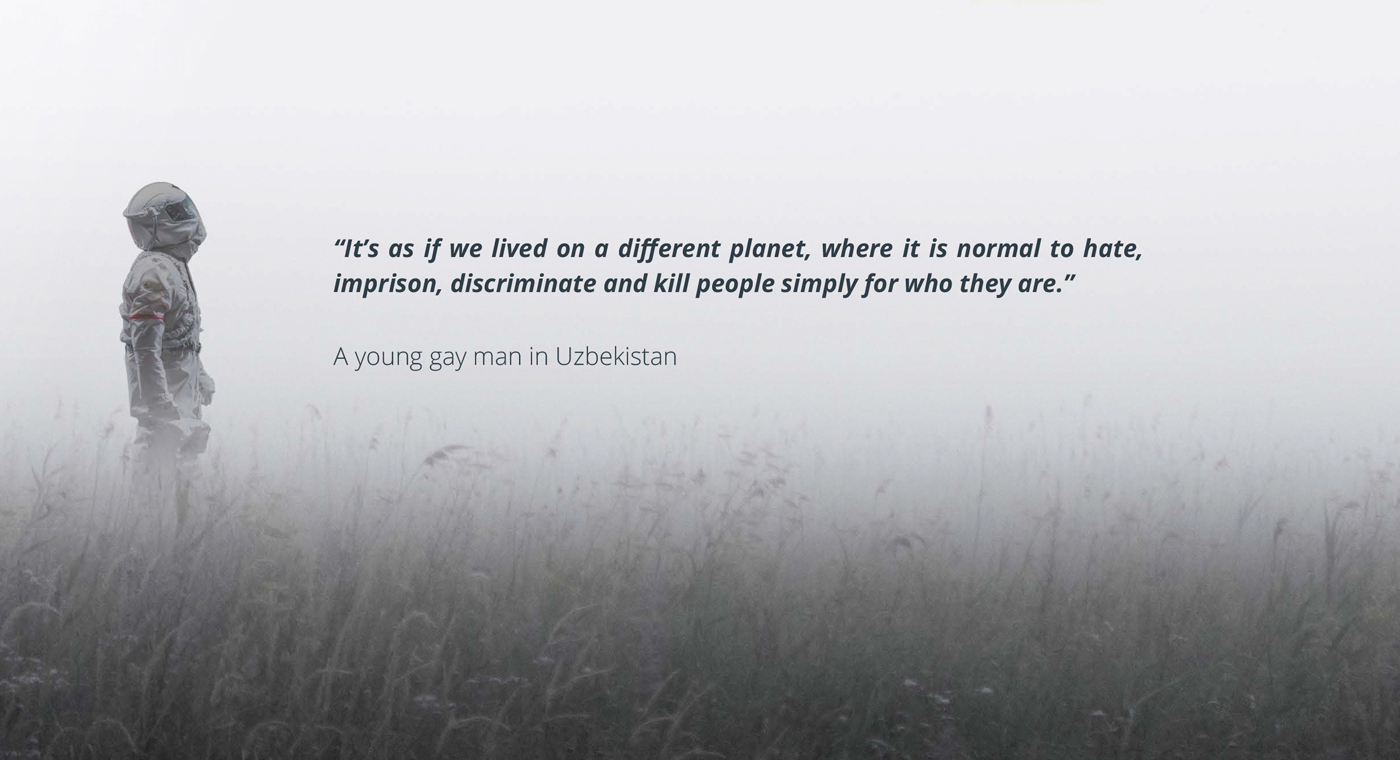 Read the report in English, Russian, and Uzbek.

The Uzbekistani authorities should swiftly decriminalize consensual sex between men, according to the conclusions of a new report published today by the Association for Human Rights in Central Asia (AHRCA), the Eurasian Coalition on Health, Rights, Gender and Sexual Diversity (ECOM) and International Partnership for Human Rights (IPHR). The groups say that it is imperative for Uzbekistan to make progress toward enshrining its international human rights commitments into law at this time, while a new draft Criminal Code is still under consideration.

Article 120 of the Criminal Code of Uzbekistan punishes consensual sexual relations between men by up to three years’ imprisonment. While an increasing number of countries around the world protect lesbian, gay, bisexual, trans, intersex and queer people from discrimination and have outlawed punishment for same-sex relations, the report Like living on a different planet: Gays, bisexual men and trans people vulnerable to abuse, imprisonment and discrimination in Uzbekistan demonstrates that lesbians, gays, bisexual and trans people (LGBT) in Uzbekistan are at constant risk of serious human rights violations without any possible recourse to justice. Uzbekistan is one of only two former Soviet countries that have not decriminalised homosexuality.
In Uzbekistan, the criminalization of consensual sexual relations between men, widespread societal and religious homo- and transphobia, Russian policy influence and anti-Western sentiment amount to a toxic mix for LGBT people.
A young gay man from Uzbekistan summed up the situation of LGBT people in his country: “It’s as if we lived on a different planet, where it is normal to hate, imprison, discriminate and kill people simply for who they are.”
“International human rights law makes it very clear that the criminalization of same-sex relations between consenting adults is a human rights violation. United Nations treaty bodies have repeatedly called on Uzbekistan to repeal Article 120 from the Criminal Code,” said Anne Sunder-Plassmann of IPHR.
Information submitted to IPHR by the National Centre for Human Rights of Uzbekistan (NCHR) and the Ombudsperson for Human Rights of the Oliy Majlis (Legislative Chamber of Parliament) in January and February 2022 respectively indicates that 36 persons were convicted under the Article in 2021, 25 of them to terms of imprisonment.

However, these statistics represent only the mere tip of the iceberg and, in reality, many more people live under the looming threat of Article 120 in their daily lives. Our joint report documents police exploitation of the criminalization of homosexuality and the societal shame associated with it in order to threaten and intimidate gay and bisexual men with imprisonment and to extort money from them in exchange for not opening a criminal case or for not informing his relatives, neighbours or employers of his sexual orientation. The report also documents a pattern of police using torture and ill-treatment against gay and bisexual men in order to punish and humiliate them and to “persuade” them to pay a large bribe to regain their freedom. Under orders from Internal Affairs officials, doctors allegedly frequently conduct anal examinations to detect “evidence” of homosexual intercourse, despite the fact that they amount to ill-treatment and are “futile” and “unscientific”, according to the World Medical Association.
Ravshan, a young bisexual man, recalled how police treated him after detaining him: “They suspended me from the ceiling using handcuffs, beat me severely, and tried to rape me with a truncheon.” After that, police officers laid Ravshan on the floor and an officer jumped up and down on his stomach. Ravshan said: “I have never been beaten and intimidated like that in my entire life. I wanted to die to free myself from this torture”. When police threatened to imprison him under Article 120 unless he gave them 2000 USD, he paid up and was released.
The report also demonstrates that police often have access to the personal information of gay and bisexual men who are registered at HIV treatment centres.
“Gay and bisexual men who turn to HIV centres for treatment cannot be sure that their personal information will stay confidential. We have documented cases where HIV centre staff have informed the police of the man’s sexual orientation, putting him at risk of persecution. This is a violation of the right to privacy and poses a major obstacle to accessing much needed health care”, said Yuri Yourski of ECOM.
As if this wasn’t enough, aggressive homophobes frequently seek out gays, bisexual men, trans people and those who promote tolerance toward the LGBT сommunity on social media, threaten them with violence and disseminate their names, contact details and photos on internet-based messaging services with calls to “punish” and kill them. When in danger, these people cannot rely on the police for protection. Reportedly, some aggressive homophobes maintain close relations with homophobic police officers and share information about gays, bisexual men and trans people in order to harm them.
AHRCA President Nadejda Atayeva additionally pointed out that “there are cases where police have exploited the fear of being labelled as ‘gay’ by extending the threat of imprisonment under Article 120 beyond gay and bisexual, to heterosexual and pious Muslim men. This is yet another reason why this article, which opens the door to police abuse, has to be repealed.”
Additionally, the Uzbekistani authorities severely curtail the right to freedom of expression when it comes to expressions of support for LGBT people and disseminating information about human rights violations affecting them. For example, blogger Miraziz Bazarov was sentenced to three year’s restricted liberty in January 2022 to punish him for peacefully exercising his right to freedom of expression including by voicing solidarity with LGBT people.
His real name is known to the authors of this report but withheld to protect his safety.
In recent years, representatives of the Uzbekistani government, the NCHR and the Ombudsperson for Human Rights of the Oliy Majlis (Legislative Chamber of Parliament) have all justified the criminalization of same-sex relations with references to religion, culture, tradition and public opinion, claiming that decriminalization would have negative implications for society and for the country’s reputation in the Muslim world. However, they have failed to acknowledge or address the fact that depriving people of their liberty because of their sexual orientation contradicts the country’s obligations under international human rights law.
................................
FOR MEDIA ENQUIRIES, PLEASE CONTACT:
Nadejda Atayeva (Russian)
President, Association for Human Rights in Central Asia (AHRCA)
Tel.: + 33 6 49 38 86 59;
Email:
Yuri Yourski (English, Russian, Ukrainian)
Human Rights Coordinator, Eurasian Coalition on Health, Rights, Gender and Sexual Diversity (ECOM)
Tel.: +372 5397 1573
Email:
Anne Sunder-Plassmann (English, German, Russian)
Research and Publications Consultant, International Partnership for Human Rights (IPHR)
Tel.: +49-40-3863 1458
Email:
rule of law United Nations EU OSCE USA Financial Institutions