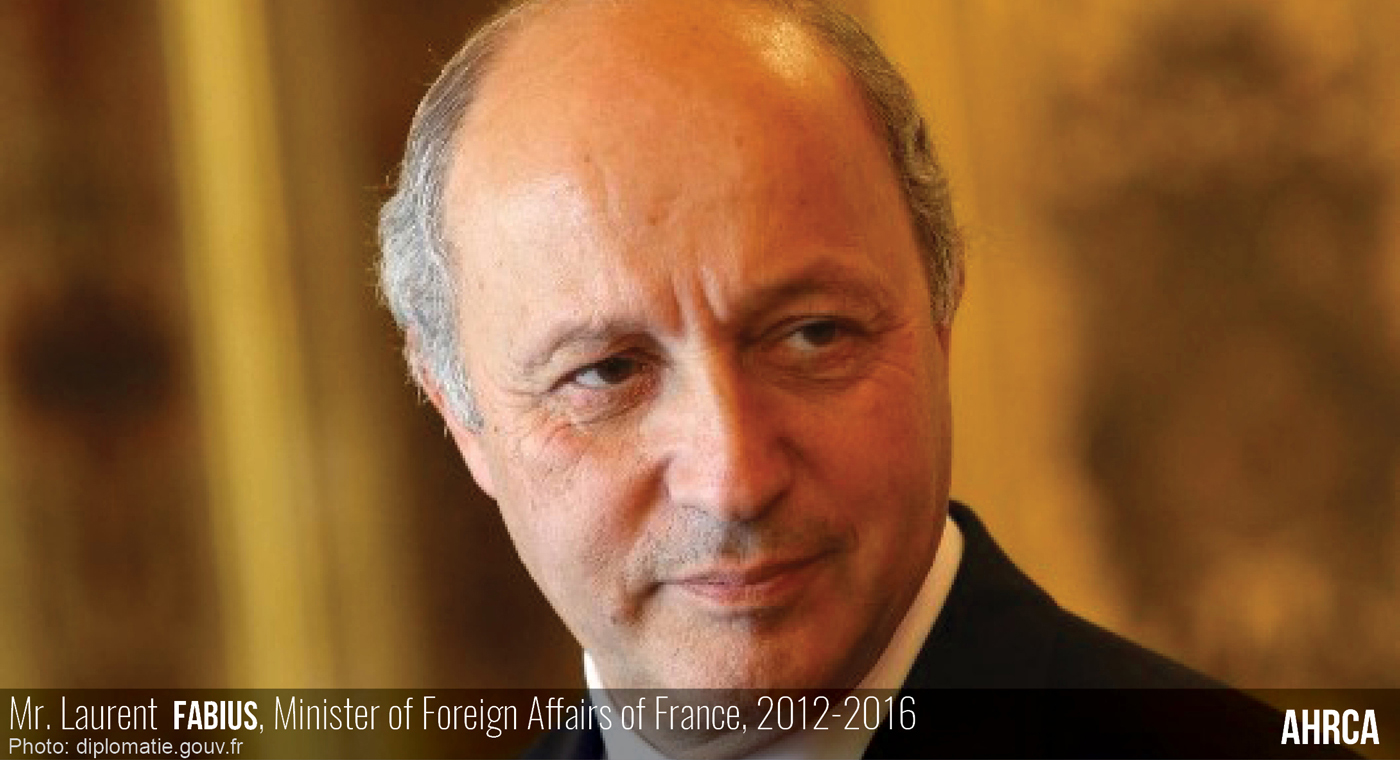 On the importance of human rights in negotiations with Uzbekistan
27 February 2013
To: Mr Laurent Fabius,
Minister of Foreign Affairs of France
Mr. Laurent Fabius,
In conjunction with your visit to Uzbekistan we call upon you to raise the most urgent and topical issues of human rights during your meetings with the representatives of the state authorities. We draw your attention to just a few of them:
The right to freedom of movement
In Uzbekistan the Soviet system of restriction to freedom of travel outside the country is preserved. Every person intending to travel abroad is obliged to obtain an exit visa in the Department of entry and exit (OVIR) of the Ministry of Internal Affairs of the Republic of Uzbekistan. It is issued maximum for two years and not to everybody. Exit visas are denied most frequently to human rights defenders, representatives of political opposition, journalists, freedom-thinking culture and art workers, etc.
In January 2013 another application by a famous artist Vyacheslav Akhunov to exit the country was declined. No explanation was provided why it was not advisable for him to exit the country. Artist Akhunov took part in 200 exhibitions in various countries of the world. This year he has been invited to the 55th Venetian biennale, which is starting on 1 June 2013. Denial of the right to exit the country to Akhunov can only be explained by the reaction of the authorities to the independent creative activity of the artist.
Since 2011 human rights defenders Abdullo Tojiboy-ugly and Shukhrat Rustamov have been denied the right to exit the country.
All these limitations including the institute of exit visa (permission to exit) are in violation of Article 12 of the International Covenant on Civil and Political Rights (the right to free movement and freedom of residence).
Imprisoned disabled persons
Disabled persons of 1st and 2nd category are serving sentences in prisons not subject to amnesties for many years.
1)   Mukhammadjon Akhmedovich Kurbanov, born 27 February 1957 in Ferghana province, citizen of Uzbekistan. 2 October 2006 he was formally recognized as disabled of the 2nd category, he has 4th phase bronchial asthma. Disability certificate No.?070009827. He is serving his sentence in UYa ?? 64/73 in the colony in Zafarabad district of Jizzak province.
2)   Rustam Rakhmankulov, born 17.10.1962, citizen of Tajikistan. In 2006 he was formally recognized as disabled of the 2nd category, which is confirmed by the letter of the Tajikistan Embassy in Uzbekistan. He is in custody UYa 64/71 in the village of Zhaslyk, Karakalpakstan.
3)   Shavkat Muslimovich Karimov, born 23 June 1971, citizen of Tajikistan. Since 30 March 1996 has 2nd category disability. This is confirmed by the certificate of the Embassy of Tajikistan in Uzbekistan. He is serving his sentence in the colony 64/47 in the town of Kyzyltepa, Navoi province.
4)   Murad Almatovich Latipov, born 1 January 1957 in Tashkent, citizen of Uzbekistan. It is mentioned in his court sentence that he has 1st category disability (blind) since1 January 1997. He is serving his sentence in the colony UYa 64/32 in the Pap district, Namangan province.
5)   Sunnat Turgunovich Talasov, born 28.08.1964 in Tashkent, citizen of Uzbekistan. It is mentioned in his court sentence that he has 1st category disability (blind). It has not been possible to determine the location of his detention. Press Release: Uzbekistan: prisoners with disabilities were not subject to amnesty, 24.02.2013.
Shutting down the office of HRW
Since 2007 the Tashkent office of the international human rights organization “Human Rights Watch”, which had functioned in Uzbekistan for 15 years. This organization enjoys special trust among residents of the country. However, it was evicted for its principles stand in the evaluation of the 2005 events in Andijan. As you know, one of the conditions, upon which European Union sanctions against Uzbekistan would be lifted, was resumption of the activity of HRW. Uzbekistan is not fulfilling that condition.
Extension of imprisonment terms
The practice of extension of prison terms to human rights defenders, journalists, representatives of political opposition, and thousands of prisoners sentenced for “religious extremism” has become a norm. This is done with a help of unfounded charges of “disobedience of the demands of the administration of the detention institution” (Article 221 Criminal Code of the Republic of Uzbekistan). Sentences are issued in violation of the principles of justice and objectivity. Extension of imprisonment terms leads to life sentence.
Former Member of Parliament of Uzbekistan Murad Juraev, 61, spent 18 years in prison. In 2012 he was sentenced again to 3 years of imprisonment. This is his 5th conviction in succession. Writer Mamadali Makhmudov, 72, spent 14 years behind bars. Currently, investigation is under way and he faces new prison term. Human rights defender Isroil Khaidarov, 62, disabled of the 2nd category, served 6 years; in 2012 he was added 3 more years.
Give us grounds for hope that during your visit to Uzbekistan You will allocate sufficient attention to the human rights theme: this should influence the fate of the above mentioned persons and organization “Human Rights Watch” in a positive way.
With respect,
Nadejda Atayeva,
President, Association for Human Rights in Central Asia
Read more
rule of law United Nations EU OSCE USA Financial Institutions