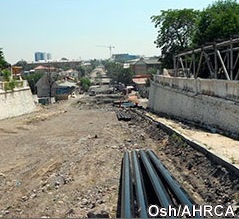 ethnic strife
An ethnic Uzbek was killed in Osh after being dragged into a conflict by few men of Kyrgyz origin.
On 7 July 2014 it was reported that a man's body with signs of fatal injuries was given to his relatives. His body was kept in the Osh city morgue for two days.
The victim was identified to be Makhmudjan Nishanov. He was 38 years old. He is an ethnic Uzbek, lived in the Ablazhan Mavlyanov Street of the Shahit Tepe district of the Osh city.
The law enforcement authorities have arrested a man involved in the murder of Nishanov, but, according to our source in Osh, the crime was committed by a group of people.
According to eyewitnesses, Makhmudjan Nishanov sold pasta and cereals in the Osh farm market (previously called Central). Shortly before his death he was approached by 5 people of Kyrgyz origin, on the basis of domestic nationalism they started a conflict that escalated into a serious clash. Witnesses do not want to talk about what they know. What is known is that a man who was party to the conflict was arrested and he is in jail, and the others are declared wanted.
Our organisation observes ethnic Uzbeks believe that seeking protection of law enforcement agencies is useless. Usually such cases turn against them, masking the cause of inter-ethnic conflict. Uzbeks are bullied often on trump up charges against them.
The Association for Human Rights in Central Asia encourages prosecution and investigation agencies to work objectively and fairly in investigating this crime. We know that the publicity of such cases encourages the agents of the State National Security Committee of Kyrgyzstan to identify sources of information and to block their contact with the independent media and human rights organisations. But the safety of victims of inter-ethnic conflicts is provided very badly.
torture corruption